Kumar Rocker is a rising American college baseball player. He is currently playing in the American National Collegiate Athletic Association college baseball for the Vanderbilt Commodores. Rocker plays as a Pitcher for his team. Kumar was part of the College World Series-winning team in 2019 and named The Most Outstanding Player.

Kumar Rocker was born November 22, 1999, in Montgomery, Alabama. He is the son of Lalitha Rocker and her husband, Tracy Quinton Rocker. His father is an American football coach in the NFL for the Philadelphia Eagles as a defensive line coach and a former player. Rocker graduated from North Oconee High School and then enrolled at Vanderbilt University. Kumar stands six feet and five inches tall and weighs 120 kg.

Kumar comes from athletic family background. Although his father played American football and is also a coach, he started training for baseball from a very early age. He played several sports in his High School days but chose to play baseball for his High School baseball team. Rocker had a 1.63 earned run average with 68 strikeouts in 55+ innings. The player was part of the Under Armour All-America baseball team and Perfect Game All-American Classic.

Kumar did not list his name for the 2018 Major League Baseball draft and later joined Vanderbilt in the Fall of 2018. In June 2019, He the first pitcher ever to throw a no-hitter in the Super Regional round. He recorded 19 strikeouts as Vanderbilt beat Duke 3–0. The same month, Vanderbilt won the 2019 NCAA Division I Baseball Championship and was named the 2019 College World Series Most Outstanding Player. Kumar was also named the 2019 Baseball America Freshman of the Year.

In 2020, Most of the league matches got canceled due to the COVID Pandemic. Kumar has listed his name for the 2021 MLB draft. He is ranked among the top draft prospect along with Jack Leiter and Marcelo Mayer.

Kumar is very much early in his career. He is about to start his professional career in the 2021 MLB season. As per the NCAA rules, Rocker does not get a single penny while representing the Vanderbilts in the NCAA tournaments. The American Universities offer their players with scholarship that helps them to cover most of their expenses. 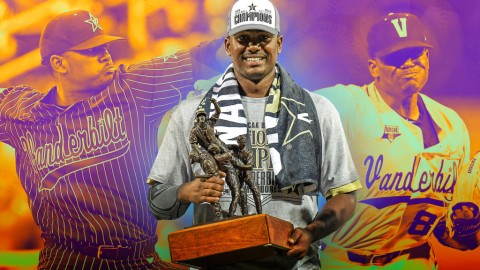 Kumar shares a photo with his Man of the series award SOURCE: MLB

Kumar is sure to land a contract with tens of millions of dollars with one of the big franchises in the MLB. The average salary of a rookie pitcher is more than $1 Million. Also, He must receive a handsome amount through the national team appearance. As per sources,  Boston Red Sox is keeping a close watch on him.

Kumar is believed to be single as of early 2021. He is very much private about his love life and relationship status. Rocker is very much early in his career and must be focusing on his career rather than spending time with people. Rocker is busy preparing for the 2021 MLB draft.