Jack Leiter is a rising American college baseball player. He plays as a pitcher for his college. Jack was named the Gatorade Player of the year and played on the USA Baseball 18U National Team in Panama City during the 2018 COPABE Pan-American Championships.

Jack Leiter was born Jack Thomas Leiter on April 21, 2000, in Plantation, Florida. He is among the four children born to Al Leiter and his wife, Lori. His father is an American former professional baseball left-handed starting pitcher and works as an advisor for baseball operations with NY Mets and studio analyst for MLB Network. He has three siblings, Lindsay Brooke, Carly Jayne, and Katelyn Grace. Jack graduated from Delbarton School and enrolled at Vanderbilt University. Leiter stands six feet and one inch tall and weighs 93 kg.

Jack started playing baseball with his father from a very early age. He was part of his High School baseball team and had several records. As his family came from the same field, it became easy for him to adopt the habit. His father remains his biggest source of inspiration for playing baseball.

Leiter was part of 2018 Under Armour All-America Baseball Game. The same year, He was part of the Gold Medal, winning  USA Baseball 18U National Team at the  2018 COPABE Pan-American Championships. Jack had  6-0 with a 0.54 ERA alongside batting .364 while playing for the senior year. As many expected him to list his name for the 2019 Major League Baseball draft, he has named a top prospect, but he committed to joining Vanderbilt University. He did not sign with the New York Yankees and enrolled at Vanderbilt to play college baseball.

Jack made his debut in February 2020 in the game against the University of South Alabama and pitched five no-hit innings while striking out 12. He was named the Southeastern Conference Co-Freshman of the Week following the performance. Leiter joined the team as a starter for the sophomore year and pitched a no-hitter in his SEC debut against South Carolina with sixteen strikeouts. 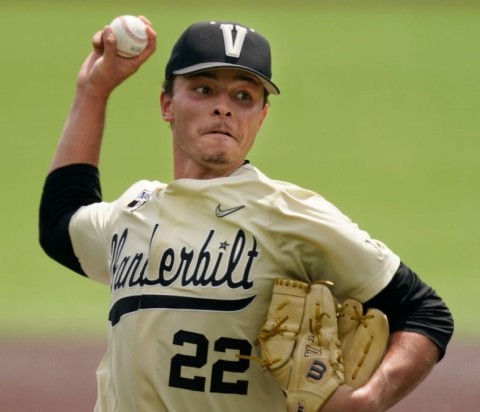 As the sophomore season is about to finish, Many top recruiters are keeping a close eye on him. He was ranked at No.1 MLB draftee at the beginning of the season but has dropped to no.5 in the list behind Kumar Rocker and Marcelo Mayer.

Jack Leiter is believed to be single as of early 2021. He is an active social media user, and his timeline is filled with photos of his games and family. There is no rumor of him dating anyone to date. Leiter is very early in his career and must be focusing on his career rather than spending time with people.

Know About Jack Leiter's Net Worth and Salary

Jack Leiter is about to begin his professional career. Per the rules, College players do not receive cash or salary to represent the university's team in the leagues. He must be living a lavish life through his father's successful career. His father, Al Leiter, has an estimated net worth of more than $30 Million.