This four-time winner of the Stanley Cup, Kris, is happily married to his wife, Julie Draper. Further, the duo is blessed with 3 children, a daughter, and 2 brave sons.

As of 2019, Kris Draper has a stunning net worth of almost $12 million. Working as a director of amateur scouting for the Detroit Red Wings, Draper reportedly earns some hundred thousands of dollars.

Kris Draper Personal Life; Know about his Wife and Children

Kris Draper is currently married to his long-time girlfriend Julie Draper. As per some sources, the duo met each other at their time of graduation. Eventually, the couples got closer and they exchanged vows in a private ceremony. 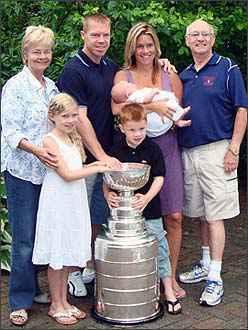 Kris Draper with his wife and 3 children SOURCE: ESPN.com

Besides, the duo is happily blessed with 3 children; 2 beautiful daughters, Kennedi and Kymryn, and a handsome son, Kienan Draper. Furthermore, Kris is also not involved in any kinds of rumors or past relationships.

Kris Draper stands an average height of 5 feet 10 inches tall and has a bulky body that weighs about 188 lbs (85 kg). Besides, talking about his appearance, he has a fair skin tone with a pair of blue eyes followed by brown hair.

Who is Kris Draper? His Early Life and Family

Krish Draper is a Canadian personality who was born on May 24, 1971, in Toronto, Ontario, Canada. Regarding his family background, nothing much is known except for the fact that his family is Canadian and he holds Canadian nationality and is of caucasian ethnicity. 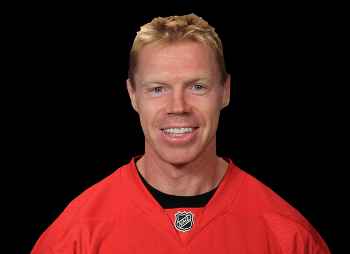 Kris Draper was selected by the Ontario Hockey League (OHL)'s Windsor Spitfires in the fourth round of the 1988 OHL Priority Selection. Later he was drafted 62nd overall in the 1989 NHL Entry Draft by the original Winnipeg Jets, Draper did not see much NHL action in his early years.

After playing just 20 NHL games for the Jets, since Kris was drafted, he was traded to the Detroit Red Wings in 1993 in exchange for $1. On the other hand,  Draper quickly becomes a valuable fixture for Detroit, and he began his reputation as the "One Dollar Man," eventually becoming one of only six players (three others were longtime teammates) to play over 1,000 games in a Red Wings uniform.

Besides, Draper also participated in eight international tournaments for Canada: