Kosta Barbarouses is an association football player from New Zealand who serves as a winger for Sydney FC of Australia's A-League. Barbarouses has earned 47 caps for the Sydney FC. The winger has played for numerous clubs in his football career, including Team Wellington, Brisbane Roar and Melbourne Victory, etc. He is one of the popular and well-respected footballers in New Zealand.

Konstantinos "Kosta" Babarouses, famously known as Kosta Barbarouses, was born in Wellington, New Zealand, on 19 February 1990. The  Sydney FC winger's age is 32 years old as of 2022. His zodiac sign is Pisces. Kosta has an athletic body structure of 5 ft 8 inches and weighs around 68 kg.

The New Zealand-born winger Kosta is of Greek descent. He is born to his father, Nick Barbarouses, but his mother's name is still confidential.

Kosta's mother is involved in the beauty business and has her own Nail salon called Omorfo Nails. He supports publicizing her business in his media. Kosta also has a sibling brother named George Barbarouses.

Kosta Barbarouses, the 2016-17 Wellington Phoenix player of the year, kicked off his football journey playing for local clubs in the Central Premier League. He turned professional in 2005, signing a two-year agreement with Team Wellington. Later on, he moved to Wellington Phoenix and then after Macarthur Rams on loan from Phoenix. Barbarouses signed a year contract with Brisbane in February 2010 and debuted on August 8, 2010.

Likewise, the forward played for Alania Vladikavkaz, Pmnanathinnaikos(Loan), and Melbourne Victory between the time period from 2011 to 2016. After completing his tenure at Melbourne Victory, Kosta returned back to his hometown club Wellington Phoenix for a season on 8 March 2016. He appeared in 26 games, adding 5 goals to his name. Later, he departed from Wellington, and he signed a two-year contract with his former club Melbourne Victory in June 2017. 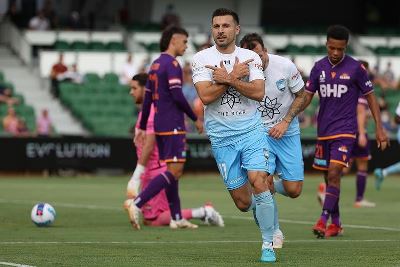 Finishing his contract, he assured to sign a multi-year deal contract with Sydney FC on 7 June 2019. The Mark Viduka Meal 2015 winner has appeared in 66 games, sending the ball 18 times behind the net.

Who is Kosta Barbaraouses married to?

Kosta Barbarouses, the Sydney FC winger, marital status is married. The footballer is happily married to his long-term GF Tara Barbarsouses. The couple's love story started way back in 2015. Before walking into the wedding aisle, the love birds date for more than seven years. The love exchanged their wedding vows on 2 September 2018. 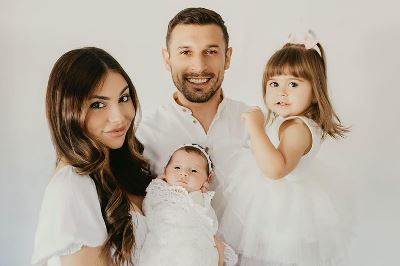 As of now, the duo is blessed with two daughters. They are living a very happy and cheerful life together. Kosta's Instagram post is also full of the presence of his family photos.

Kosta Barbarouses's net worth and earnings

Former Brisbane Roar Forward Kosta Barbarouses has been in the football line for more than two decades. So, we can assume how much wherewithal he has gained from his football career. He has a successful football career. He earns a good amount of money from Sydney FC with weekly wages of £4000, which sums to £2,08,000 per annum. Kosta is one of the top15 highest paid footballers of Sydney FC. As per the report, Kosta's worth is $6Million. He also makes plenty of income from commercial ads and endorsement deals but hasn't been made transparent about how much he makes from it.