Klaemint Olsen is a football player from Faroe Islands who currently plays as a striker for Faroese club NSÍ Runavík. With 195 goals in the Faroe Islands Premier League, he is the all-time highest goal scorer in the league. He is also the part of the Faroe Islands senior national team since 2012 and has also represented the team at various youth levels.

How much does the striker earn? Who is he Married to? Read the article to know about his biography in detail.

Klaemint Olsen Salary and Net worth

Klaemint Olsen plays for the NSÍ Runavík since 2007 and is the all-time top scorer in the Faroe Islands Premier League. As a star player, he is one of the highest-paid players in the league and makes thousand of dollars playing football. Besides, he is also a regular member of the national team through which he earns a good wage.

Klaemint also makes money from advertisements, sponsorships, and endorsement deals. However, he hasn't revealed the actual figure. His net worth in 2020 is estimated to be in 6-digit figures.

Klaemint Olsen is rumored to be married and the father of a daughter. However, there is no concrete evidence of it. He has shared several photos of a girl on his Instagram who is rumored to be his daughter but he has not revealed anything about it. He hasn't talked about his relationship status and wife yet. 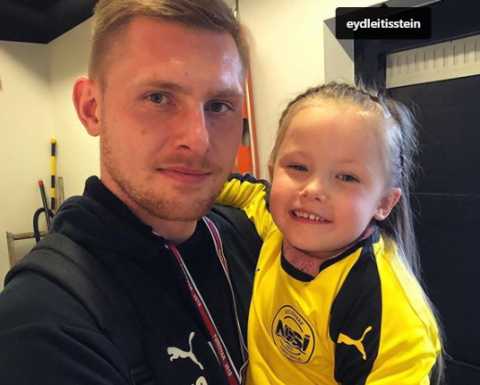 The Faroe striker was born as Klæmint Andrasson Olsen on 17 July 1990 (age 30) in Runavík, Faroe Islands. The details about his parents, family, childhood, and siblings is not available.

Olsen started his professional career with NSÍ Runavík in 2007. In 2011, he became the Faroese league's second-highest scorer with 17 goals. Starting in 2013, he won 4 consecutive golden boots. He is also the first Faroese to score two international hat-tricks.

He has been representing the national team since 2012 and scored his first international goal against Spain in a UEFA Euro 2020 qualifying match. Recently, he was called up to play UEFA Nationa League. He has scored 3 goals in 30 matches for the national team.