Kiyan Anthony is a well-known American celebrity child. He is better known as the son of an American professional basketball player for the Los Angeles Lakers of the National Basketball Association, Carmelo Anthony. He is currently following his father's successful footsteps and playing basketball for High School.

Kiyan Anthony was born on March 7, 2007, in Denver, Colorado. He is among the only child born to Carmelo Anthony and his former wife, Alani Nicole "La La" Vazquez. His father played basketball in the NBA, and his mother is an American television personality, author, businesswoman, producer and actress. Anthony is attending Christ the King High School in Middle Village, Queens. Kiyan stands five feet and seven inches tall and weighs 55 kg.

Carmelo and Alani have been married for more than ten years. They have had many ups and downs in their married life. Anthony and La La started dating each other in early 2004 and became engaged on December 25, 2004, at a private ceremony in front of parents and close friends. They have not shared about their first meeting experience. 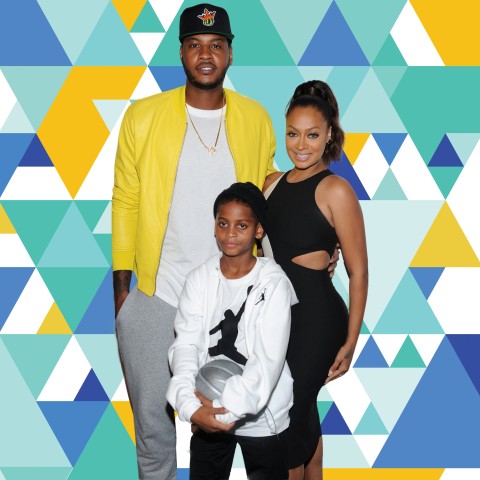 Kiyan attends an event along with his parent's SOURCE: Getty Images

In early 2007, The duo opened about expecting their first child. In March 2007, Their only child, Kiyan, was born. The family of three lived a happy and peaceful life until 2016. As per sources, after the 2016-17 season, This happy-looking relationship had some bitterness and then started living apart. The reason for their separation was never revealed. The two reconciled in December 2018 and started a happy life together.

In 2020, Carmelo sold his New York Property and lived in Portland. In June 2021, Rumors of La La filing a divorce paper with Carmelo surfaced, and they separated from each other's lives. The final decision is not made yet, and Kiyan spends his time between father and mother. There has been no rumor of the stars dating anyone in public after the separation.

Kiyan is living a lavish life through his parent's successful career. He is the only child born to his parents and is worth more than $200 million combined. Anthony is very early in his career and has yet to start his professional career. Kiyan plays basketball for his High School team and will be making millions in the future.

Kiyan's mother, La La, has a net worth of $20 Million. She has earned most of her net worth for her two-decade career in American television and business. La La launched a cosmetic line in February 2012 and also a clothing line in 2013. The actress has also written several books.