Ypres native, Kim Mestdagh, is a Belgian professional basketball player currently playing for the Washington Mystics of the WNBA. Besides, she also plays for Perfumerias Avenida of the Liga Femenina de Baloncesto and the Belgian national team.

Born on 12th March 1990, Mestdagh is currently 29 years old. Her birth sign in Pisces. Further, the Belgian is currently in a relationship with her longtime girlfriend, Giorgia Sottana.

Besides WNBA, she plays for Perfumerias Avenida of the Liga Femenina de Baloncesto. According to the source, the basketball player for the Spanish league earns an average of $13,000 monthly.

Also an international player for the Belgian national team, she approximately summons $39,663 from the national team.

Kim Mestdagh is an openly lesbian and currently dating her girlfriend, Giorgia Sottana. Her love, Sottana is an Italian basketball player who plays for Fenerbahçe and the Italian national team. 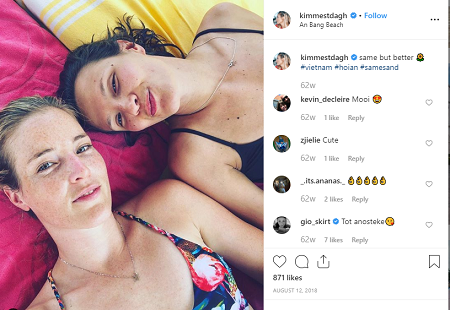 The duo is not shy to flaunt their romantic affair to the world. Scrolling through their respective Instagram, the couple have a healthy relationship. In fact, they give couple goals to the lovers out there.

In terms of traveling to new places, Mestdagh and Sottana are inseparable. As of 2019, its been over four years of their relationship. Yet, they have not shared any information about the wedding.

Kim Mestdagh was born to parents: Phillip Mestdagh and Johanna Baert. She has a sister.

Having a keen interest in basketball since her childhood, she took basketball in her high school level and well as at University too.

Later, she went undrafted at the 2012 WNBA draft.

In 2019, she signed to WNBA basketball team Washington Mystics where she is teamed up with Elena Delle Donne and Kristi Toliver.

At the international level,  she represented the Belgian teams which won the bronze medal at EuroBasket Women 2017. Further, with her team, she finished in fourth place at the 2018 FIBA Women's Basketball World Cup.

For More Bio Of WNBA Player Stay Tuned With Playerswiki.