Kevin Sutherland was born Kevin John Sutherland on July 4, 1964, in Sacramento, California. He is among the two children born to their parents. Kevin rose to fame only after his successful career in golf so, He is yet to share information about his early life with the public. Sutherland graduated from Chrisitan Brothers High School and then enrolled at Fresno State University. Kevin stands six feet and one inch tall and weighs 84 kg.

Kevin Sutherland's Net Worth In Millions

Kevin Sutherland has an estimated net worth of more than $20 Million. Kevin has been laying at the professional level for more than three decades. In 2021, Sutherland stands and no.1 in Champions Tour Money Leaders with a total earning of  $1,657,407 from eighteen events. The golf player must be making a huge sum from his sponsors and advertising deals.

In the 2007/8 season, Sutherland earned $2.5 Million from twenty-six events which remain his highest-earning in a single season to date. Since the 2012/13 season, Kevin has not played in the PGA Tour. He has shifted his focus towards PGA tour Champions and won several titles. Totaling his earnings from PGA Tour, it sums to $15,658,171.

Kevin started his professional carer right after graduating from the university in 1987. He played in several minor leagues before making it to the PGA Tour in 1992. After fifteen years of his professional career, Sutherland won his first title in the WGC-Accenture Match Play Championship in 2002. In 2009, The was into the top 50 World Golf Ranking. Back and neck injuries forced Sutherland to limit his PGA Tour career in 2011 and 2012. 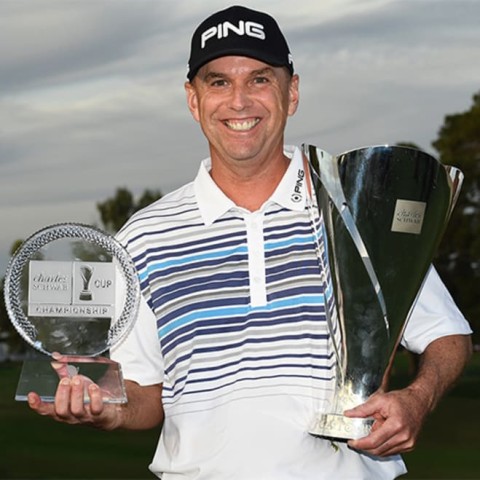 Sutherland, along with his PGA champions Title SOURCE: PGA Tour

Sutherland won his first PGA Tour Champions title in 2017 at Charles Schwab Cup Championship by one stroke against Vijay Singh. In 2019, He won two more champions at Rapiscan Systems Classic and Principal Charity Classic against Scott Parel. Although Kevin has played in the league for more than three decades, He has not been able to win any major events.