Kevin Streelman was born on November 4, 1978, in Scottsdale, Arizona. He is among the three children born to Dennis Streelman and his wife, Mary Lou. He graduated from Wheaton Warrenville South High School and then enrolled at Duke University. Kevin stands five feet and ten inches tall and weighs over 79 kgs.

How Rich is Kevin Streelman? Know About His Earnings, Net Worth, and Prize Money

Kevin Streelman has an estimated net worth of more than $20 Million. Streelman must be making millions of dollars from his sponsorships and advertising deals. Kevin has a sponsorship deal with Wilson Stuff, Jetlinx, Johnnie, LocaliQ, Titleist, and a few more. He has already earned more than $1,065,924 from seventeen events in the 2021 season. 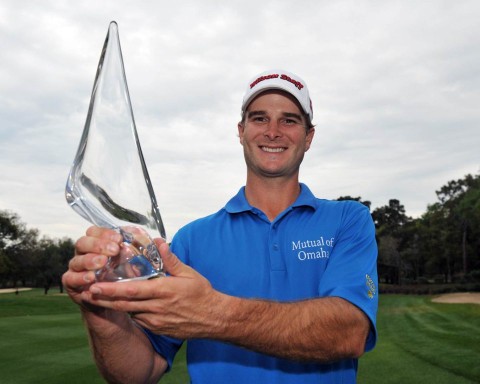 Kevin joined PGA Tour in 2002 but earned his first prize money in 2004 when he played two events and took home $21,000. The following season, He earned $1.3 Million from thirty-two events played where he made cuts in twenty-four events. His earning from PGA events did not drop less than a million until 2011/12 seas. In the 2012/13 season, Streelman took home $3,088,284 from just twenty-five events. He won his first PGA event and made cuts in eighteen games that remain his highest-earning in a single season.

Yes, You read that right. Kevin is the proud father of two children. Kevin married his longtime girlfriend, Courtney, in the early 2000s. They had been seeing each other for some time before their marriage. Shortly after the wedding, The duo welcomed two children, Sophia and Rhett. The family of four is living a happy married life in Scottsdale, Arizona.

Kevin started playing golf from his High School and caddied at the famed three-time U.S. Open venue Chicago Golf Club while growing up.  He co-captained the Duke team with Denver Brown and played in the college golf with Leif Olson. Streelman turned professional in 2001 shortly after graduating from Duke. The player qualified for the 2008 PGA Tour after finishing 14th at the 2007 qualifying school.

In 2009, Streelman entered in top 100 in World Golf Ranking. It took him more than twelve years to win his first professional title. In 2013, He won his first PGA title at Tampa Bay Championship. The following year, Kevin won his second PGA title in the Travelers Championship. In the ongoing RBC Heritage Event, Streelman is in T33, and his Friend, Harold Verner III and Emiliano Grillo, are leading in the leaderboard.