Kevin Nahin Alvarez Campos, mainly known as Kevin Alvarez, is a rising Mexican associational soccer player. The player is currently signed to the Liga Mx Club Pachuca, where he serves as a right-back. He is also the national player of Mexico's national football team. For your information, he represented Mexico at U20 and U23 before playing for its senior squad.

Kevin Alvarez is a talented upcoming Mexican football player born on January 15, 1999, in Colima, Mexico. The 23-year-old is a right-footed player with a height of 5 feet 9 inches and a weight of 63kg. Additionally, the defender wears jersey number 2 for Pachuca. Kevin is one of the possible future soccer stars from Mexico.

Is He the Youngest Member Of the Mexican National Football Team?

Yes, the 2022 Liga Mx Aperture Champion, Kevin Alvarez, is a young player in the Mexico national team. His international debut for Mexico came on July 3, 2021, against Nigeria. Notably, the professional was also a member of the 2022 FIFA World Cup  Mexico national football team, where he played two world cup games. 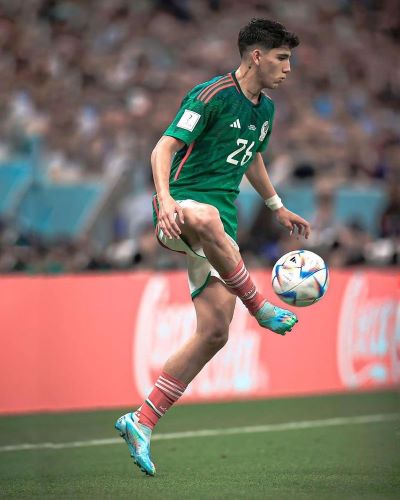 All thanks to his dedication and hard work, Kevin earned a safe spot on his nation's squad.

Salary And Net Worth Revealed

Kevin, the Colima native, is one of the successful youth players in Liga MX. Despite his young age, he gets more paychecks than many other senior players—the Mexican international ranks in Pachuca's top sixth position in salary payment. At Pachuca, he receives a weekly pay of £13,000 and an annual pay of £676,000. Currently, his estimated net worth equals $1.5 Million. Also, Alvarez gets a salary and bonus from the Mexican Football Federation. Keeping in mind, the Mexican is just 23 years old. Therefore, if he delivers consistently, he will earn millions of dollars. Kevin attending an event with his mother  SOURCE: Instagram

Apart from football, Alvarez is an Adidas sportsperson. Moreover, the professional has remarked on a long-term contract with it, accumulating millions in his bank balance. His current transfer market value is €6 Million.

Is Kevin Dating Anyone? Love Life And Affairs

Kevin, the future Mexican football star, 23, is very confidential towards his privacy. The player never revealed anything about his love affairs. So determining his love life at the moment looks pretty challenging. More, he is in the beginning phase of his footballing life. Thus, due to this, he is more concerned about his career his rather than anything. Indeed, his social domain is full of his football career photos, which hint at his love and passion for soccer.

Who Is Puchuca Defender Kevin's Parents?

His parents prefer to keep their identities hidden despite Kevin's fame and popularity. However, he often shares his mother's photographs on his social media platform. Alvarez appears to be a mama's boy. The defender is very close to his mother. For your information, his father is no more with him. However, the exact cause of death is still unknown.

Furthermore, the mother-son often attends several sporting events where he is seen stating his parent's role in his footballing career.

Visit Playerswiki for updates about athletes.