Kenny Dillingham was born on April 28, 1990, in Phoenix, Arizona. He did not come from a reputed family and has not shared much about his early life and parents. Dillingham graduated from Chaparral High School and enrolled at Arizona State University.

Kenny played football in High School. He could not continue his playing career and began his coaching career at seventeen. Dillingham started off working with the junior varsity team at Chaparral High School. After working for the four-season, Dillingham got promoted to offensive coordinator.

In the early 2014 season, Arizona State University hired Kenny as their new Offensive Assistant. Meanwhile, He also graduated with a degree in business/economics. Dillingham moved to the University of Memphis as their new graduate assistant. After spending a season with the team, Memphis upgraded to Quarterback Coach and added tight ends coach to his duties for 2017. In 2018, Dillingham was promoted to offensive coordinator.

Kenny led the offense to back-to-back top 5 offenses in college football. While at Memphis, Dillingham was rated the #1 recruiter in the conference by the 247 recruiter rankings. In early 2019, Kenny moved to Auburn University as their offensive coordinator and quarterbacks coach. The coach helped Bo Nix become the SEC Rookie of the Year. Auburn also had its highest recruiting ranking in the 247 recruiting eras during Dillingham’s year as OC. Kenny is working as the offensive coordinator
SOURCE: AL

Who is Kenny Dillingham Married To? Know About His Wife and Children

Kenny Dillingham is married to his longtime girlfriend, Briana Plimpton. The love birds walked down their wedding aisle in February 2018. They had seen each other for more than four years before exchanging their wedding vows. Briana and Kenny got engaged in December 2016. The couple met each other in 2014 and have been together since then. 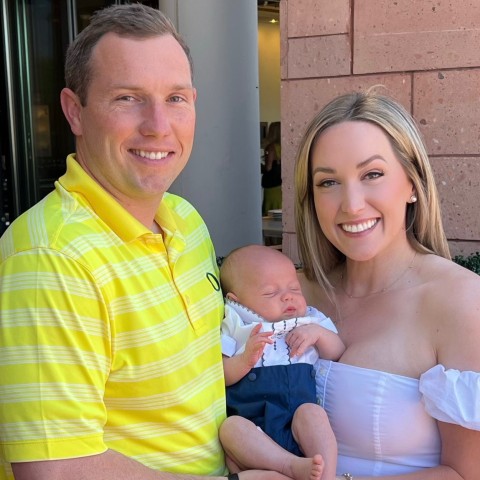 Kenny shares a photo of his wife and son SOURCE: [email protected] Dillingham

In October 2021, Kenny opened up about shortly expecting a new baby boy. The family of three is living a happy married life. In May 2022, Dillingham first shared a photo of his wife and child on Twitter.

Kenny Dillingham has an estimated net worth of more than $2 Million. He credits most of his net worth to his successful career in American football. As per sources, Kenny had a salary of $625,000/season with Florida State University. In 2018, He received $500,000 from the University of Auburn. While working for the University of Memphis, Kenny took home $280,000.