Kemar Roach was born Kemar Andre Jamal Roach on June 30, 1988, in Sant Lucy, Barbados. He rose to fame only after his career; so much about his parents and his early life is still under the radar. Roach started playing cricket in the early days and did not continue his formal education. Talking about his physical appearance, Kemar stands five feet and eight inches tall and weighs 70 kg.

Kemar was a promising young cricketer from his early days. He rose to fame only after making his international debut in June 2008 in a T20I game against Australia. Although, The player was selected for the Test squad but did not make his debut until July 2009. In his debut match of T20I, Kemar finished with the best bowling figures in the match of 2/29 from three overs. After that, Roach was named for the ODI squad and made his debut in August 2008 against Bermuda. 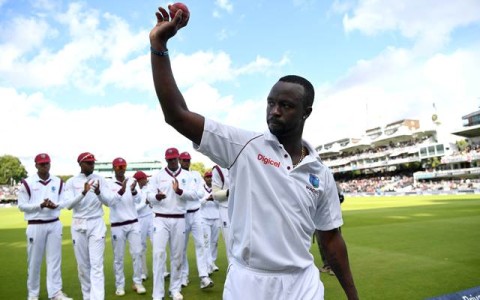 Kemar holds up the ball after a game SOURCE: Crictraker

Kemar left an impact in his first test match against Bangladesh in 2009. In December 2009, Australia Captain Ricky Ponting appreciated his control and accuracy. Over the next few years, He was part of the International team and played globally in numerous formats. Meanwhile, Roach has played for Barbados for the Domestic league games since 2008. In the 2011 season, The player moved to England to play for Worcestershire and then to Antigua hawksbill.

After 2012, Kemar had many ups and downs in his career. Roach returned to the international cricket team in 2018 but could not capitalize on his potential. He has played in sixty-seven test matches, ninety-two ODI, and eleven T20I games in his professional career. Kemar has joined Surrey for the County Championship in England.

Kemar listed his name for the 2010 IPL auctions and was among the highest-played player in the season. Deccan Chargers and Chennai Super Kings went head to head until $700,000, and finally, the Chargers won the bid with $720,000. He played with the team for two seasons but was not much useful.

Kemar Roach has an estimated net worth of more than $1 Million. A cricket player makes a huge sum from their salary. Also, They make a hefty amount from their endorsement and advertising deals. Kemar earned more than $1.4 Million from two seasons while playing in the IPL.

Who is Kemar Roach Dating? Know About His Girlfriend and Relationship Status