Kayla DiCello is a renowned American artistic gymnast. Besides, she is also recognized as part of the United States women's national gymnastics team. Additionally, DiCello has a long list of achievements despite the fact she is still young.

The 2021 World all-around bronze medalist Kayla is worldwide known for her amazing gymnastics skills and techniques. Further, she has competed in various championships and competitions, among which the 2018 Pacific Rim Gymnastics Championships was the major breakpoint for her. After competing in the championships, she was officially added to the junior national team.

The American gymnast Kayla started her career in the sports vocation from an early age. However, she was recognized officially in 2018 after competing at the 2018 Pacific Rim Gymnastics Championships. Likewise, Kayla always has had a keen interest in gymnastics, so she became a junior elite in 2017 after readying at the Brestyan's National Qualifier.

Further, on 2018, she was added to the junior national team after competing in the 2018 Pacific Rim Gymnastics Championships, where she also won gold in the team and vault, uneven bars and silver in the all-around behind Jordan Bowers. Likewise, she later competed at the 2018 U.S. Classic and concluded the match in the second position behind Leanne Wong. 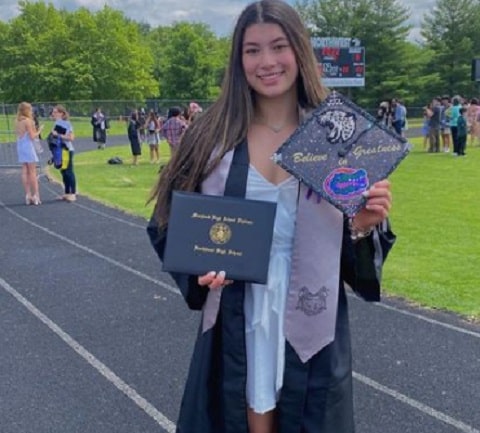 The young and talented gymnast has competed in various competitions throughout her junior career, including National Championships, WOGA Classic and many more. Likewise, on 2020, she made her senior career debut by competing in the American Cup. She completed the cup in the second position. However, Kayla scored the second highest on the vault and the third highest on the floor.

Inaddition to this, Dicello got the opportunity to compete at the 2021 World Championships alongside Leanne Wong, Konnor McClain, and eMjae Frazier. Likewise, that same year in November, she signed her national letter of purpose to compete for the Florida Gators. In early 2022, the world-famous Kayla was selected to compete at the Pan American Championships, where she won successfully on the floor exercise. She was the major reason behind her home country's qualification to the team final in second place.

Her Age And Personal Life

The gymnast Kayla was born Kayla Kecia DiCello to her parents, Matt and Kecia DiCello, on January 25, 2004. Furthermore, her parents raised her in her hometown Boyds, Maryland, USA. Kayla also has three siblings two sisters named Karleigh and Kyra and a brother named Hunter.

Amazingly, DiCello started her career in the vocation when she was just two. Her dedication and passion have shown how badly she wants to be a gymnast and successful in the field. Well, nothing much can be found about her academic qualification, but we know that she attended the University of Florida on a gymnastics scholarship. Additionally, her star sign is Aquarius. 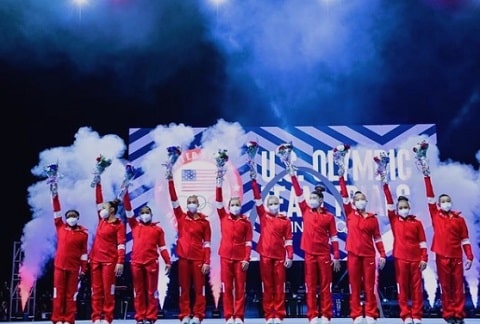 Kayla DiCello along with the USA team in Tokyo SOURCE: Instagram @kayladicello.com

Furthermore, she hasn't exposed much about her private career, as the young gymnast is currently focused on her career rather than anything else. Besides that, she is very lucky to have such supportive parents who have been there for her to accomplish her dream career from a young age.

How Rich is DiCello? Her Networth And Salary

Being engaged in the field from a young age,  Kayla DiCello has gathered a considerable amount of money and fame. Many people seem curious to know her networth and salary as she has a strong fan base. Most of the sources have revealed that DiCello has a networth estimated to be around $ 5 million.

Similalry, her current salary is predicted to be $800,000 so this surely says how rich and well settled despite the fact she is just 18 years old by this year.  DiCello has made enough money from her professional career as a gymnast. Similarly, her sports career is also the primary source of her income. 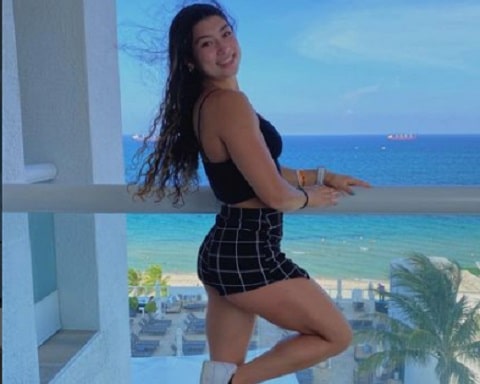 After exploring her career, we know that she has won numerous events from where the gymnast has also made enough money. Kayla seems to live a happy and luxurious life. However, being of young age, she is mostly focused on her career rather than flaunting her lavish lifestyle, which is why she often posts game-related content on her Instagram handle.

Kayla Dicello appears to be in a romantic relationship with her boyfriend named. Makhi Walker. Besides, he is a rugby player, and both the couple belongs to the same profession, i.e., sport. Furthermore, both pairs constantly share their pictures on their social media handles.

Similarly, fans are in love with their bond, and they love commenting on the best wishes of their favorite couple as they love seeing them together and happy. In addition, We have no clue when the lovebird started dating; nevertheless, we know they both make a perfect match. 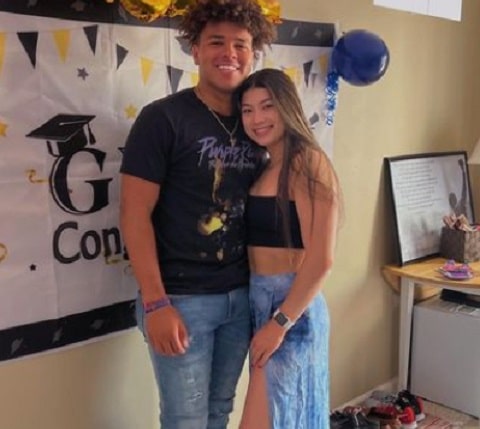 Moreover, the lovely couple has opened their relationship, and they love traveling together and clicking pictures when they are not busy.

The very beautiful and talented Kayla is an active user of social media sources, including Instagram. Besides, we can follow her under the username @ kayladicello, where she has earned more than 39k followers.

Additionally, Kayla loves to be active on the platform and shares her game and training content with her followers. She often communicates with her fans online. Besides that, her fans often see the content related to her training and events where she focuses the most.

You may explore more about your favorite athletes and their personal and professional career on playerswiki.com.