The 2014 Woman of the Year, Katie Pavlich is an American conservative commentator, blogger, podcaster, and author. Currently, she is a news editor at Townhall.com and a contributor to Fox News. Besides, she has appeared on various national and local radio shows on channels including CNN, Fox News, CNBC, MSNBC, and Fox Business. In high school, she played basketball and volleyball.

Arizona native, Katie Pavlich was born on 10th July 1988, under the star sign Cancer. Her birth name is Catherine Merri Pavlich. She holds an American nationality and belongs of Irish, German, Croatian, and Australian descent.

Engaged in many jobs at a time, Katie Pavlich has earned a good deal of money out of her career. A contributor at Fox News has a minimum salary of $100,000 per annum. Further, she earns another six-digit figure annually as a news editor for Townhall.com.

Additionally, she has authored various books such as "Fast and Furious: Barack Obama's Bloodiest Scandal and Its Shameless Cover-Up" and "Assault & Flattery: The Truth About the Left and Their War on Women" which earned her a good deal of money as well.

Katie Pavlich is a married woman. She tied the knot with an Israeli resident Gavy Friedson in 2017 after dating him few years. Her husband Gavy works in an NGO. Scrolling through her IG, she is seen posting adorable pictures with her better half. The couple is yet to have their own child, they are parenting a four-leg baby, Gadsden for now. 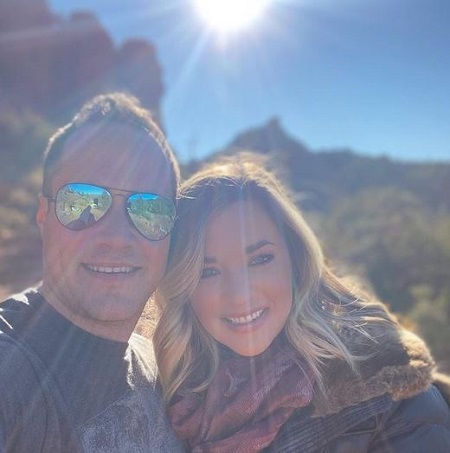 In her spare time, Katie enjoys traveling, spending time with her husband, friends, family, and the great outdoors which she features on her socials. She has been to 44 of 50 U.S. states and five of seven continents.

Katie relocated to Washington D.C. to pursue her career where she began working at a popular American conservation website, Townhall.com, as a news editor. Also, she became a contributing editor of the websites' magazine, the print version of ‘Townhall.com.’ Later, she joined Fox News, as a contributor aiming to earn a bigger position at the news agency.

Her breakthrough came in 2013 when Katie was hired as an alternate co-host for the Fox panel talk-show ‘The Five.’ Though she was not a regular host on the show, she did her job remarkably well, earning good feedback from the audience.

To count, her notable work includes a Washington Fellow on National Review. In 2018, she started co-hosting the podcast "Everything's Going to Be All Right" with Season  Spicer, former White House Press Secretary.

Born as the eldest child of two in the family, Katie grew up with her younger brother. Not much is known about her parents but she mentions her grandfather, John Pavlich, who fought as part of the American side in the Second World War.

Raised in the mountainous areas of northern Arizona, she had a keen interest in outdoor activities such as river rafting and fishing.

Katie enrolled at Sinagua High School, where she played volleyball and basketball. Further, she is a member of the Daughters of the American Revolution. Upon high school graduation, she joined the University of Arizona and earned a degree in broadcast journalism.