Karyn Elaine Bryant a.k.a. Karyn Bryant is an American actress, television, and writer. A Patriots and Red Sox fan, she joined ESPN for their first live New Years' Eve show as the countdown to 2006 began and currently, host co-hosts most of the UFC Pre and Post shows on the network. What's more? she co-owns MMAheat.com which covers most mixed martial arts sporting events.

Boston, Massachusetts native, Karyn Bryant was born on 23rd December 1968, under the star sign Sagittarius. The fifty-two years holds an American nationality and is of Jamaican descent through her mother. A graduate of secondary school at Lawrence Academy at Groton, she earned Bachelor's Degrees from Brown University in political science and sociology. She stands 5 ft 8 in (173 cm) tall.

From MTV to TNT to NBC to ESPN, Karyn Bryant has well played her role as host. Along with name and fame, she has earned a tremendous fortune from her broadcasting career. As of 2021, her net worth is approximately $1 million.

Aforementioned, Karyn Bryant currently works co-hosts most of the UFC Pre and Post shows on ESPN. The national average salary for an employee at ESPN is $52,519 per annum. Other than that, she co-owns MMAheat.com which is also her source of income.

Karyn Bryant is married to Wade Eck, a producer and cinematographer who is known for Dogstar: High School 2 (2018), MMA H.E.A.T. (2009), and A Wedding Story (2001). The couple tied the knot on 15th September 2001, in an intimate wedding ceremony. Almost two decades of marriage and still Karyn and her husband are going strong. 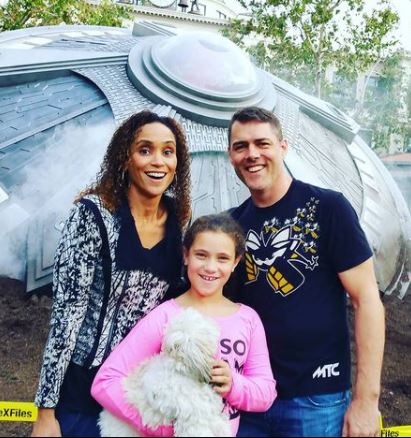 Karyn's passion for music led to her first television job as an MTV VJ in 1990. Later, she hosted a live, daily music program, Sound FX.

Subsequently, TNT hired Bryant to host a series of entertainment vignettes called Rough Cut. The success of the show turned Rough Cut into a weekly television series hosted and written by Bryant, which marked the beginning of her professional relationship with Turner Broadcasting.

After working in TBS' series Movies, For Guys Who Like Movies, Lorne Michaels picked Bryant to host his new daily VH1 game show, Name That Video in 2001. She filmed 50 episodes. In 2004, she became co-anchor of CNN's revamped Showbiz Tonight.

Besides, Bryant also co-owns MMAheat.com. At present days she co-hosts most of the UFC Pre and Post shows on ESPN.