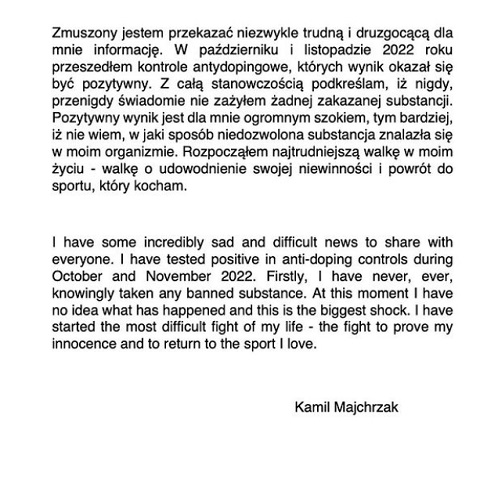 After that, Majchrzak also took to Instagram to share the news. In the statement, Majchrzak admitted that he has never taken banned substances knowingly.

Insights on Majchrzak's Net Worth and Career Earnings 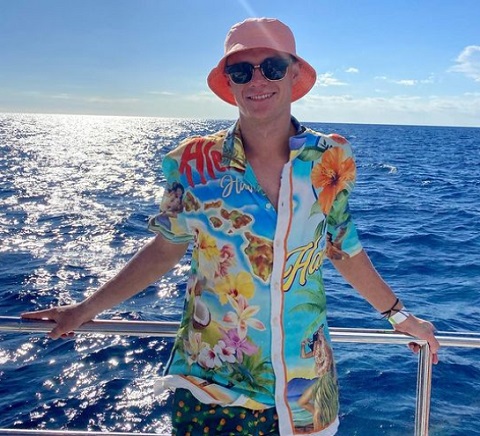 Likewise, Majchrzak gave outstanding performances in the following seasons and earned more than $70,000 from 2016 to 2017. In 2022, he made a total prize money of $713,924. As he is still playing professionally, it can be said that Majchrzak's income will take a rise in the coming years.

The professional tennis player has worked with some brands which he wears in different tournaments. His shoes and apparels are from Lotto. Majchrzak uses rackets from Yonex.

Lucia Bronzetti is another tennis player who has also worked with Lotto.

Kamil Majchrzak Is Married to His Wife, Marta

Majchrzak is married to his long-term partner, Marta. The newly wedded couple have been together for a long time. However, it is unknown when they began dating. Together, the duo have explored many places and has also celebrated their special moments together. 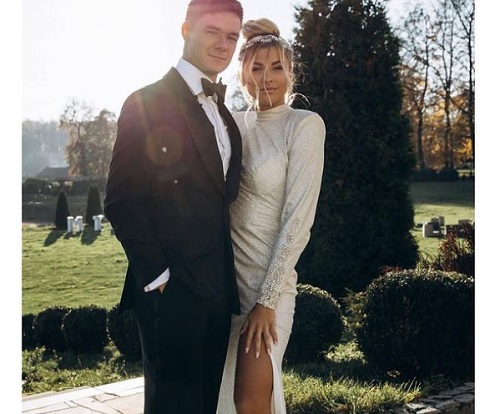 Kamil Majchrzak and his wife, Marta, at their wedding.  SOURCE: Instagram @kamilmajchrzakk

After dating for some years, the tennis player went on Instagram to share the news of his engagement with Marta in November 2021. He shared some pictures showing engagement rings to their well-wishers. They also celebrated the 2022 Valentine's day together.

Finally, Majchrzak and his fiancee, Marta, tied the knot in November 2022. They walked down the wedding aisle in the presence of their family and close ones. Bujak Studio captured their special moments. The 5 feet 11 inches tall tennis player also shared the wedding news by posting a photo on IG. We can find him active as @kamilmajchrzakk.

Majchrzak began playing tennis at the academy of a family friend. He couldn't play tennis in the early days but later tried hard and became a professional. After finishing his junior career, Majchrazk turned professional in 2014. He has already played in major tournaments giving his best.

Majchrzak also participated in 2019 Australian Open and advanced through the qualifying to reach the 1st round. He won the first two sets against Kei Nishikori. However, Majchrzak was forced to retire due to an injury. He also participated at the 2019 Open Harmonie mutuelle in St. Brieuc, France. After two months, Majchrazk advanced to the 2019 Prosperita Open final. He also reached the semifinals of the 2019 Ilkley Trophy Challenger and qualified for Wimbledon too. Majchrzak defeated Alastair Gray at the 2019 Hall of Fame Open in Rhode Island. Likewise, the professional tennis player lost in the final round of qualifying at the 2019 US Open.

At the beginning of 2020, Majchrzak participated in the inaugural 2020 ATP Cup. After that, he suffered a broken pelvic bone. Due to that injury, he didn't play in tournaments like 2020 Australian Open and Maharashtra Open. In August of the same year, he returned to tennis. Majchrzak began his 2021 season at the 2021 Great Ocean Road Open in Melbourne, Australia. 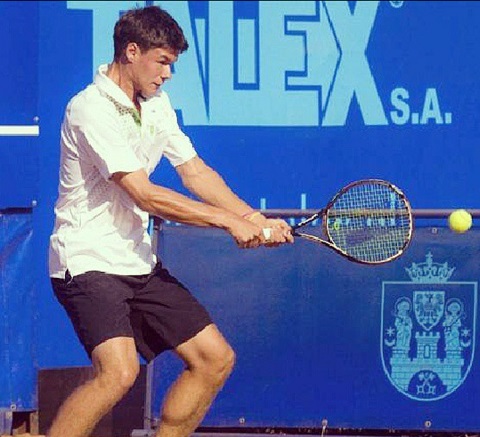 Majchrzak also represented Poland at the 2020 Summer Olympics. In the tournament, he was beaten by Miomir Kecmanovic in the first round. In the same season, he played in the 2021 Sofia Open. He won all three matches at the 2022 ATP Cup. His 2022 season went pretty well.

Born on January 13, 1996, Kamil Majchrzak grew up in Piotrkow Trybunalski, Poland. Majchrzak's parents are Piotr and Karolina. Kamil is not only the child of his parents as he was raised along with his brother named Adam.

Both of his parents were teachers. Kamil considers his father his hero.