Kameron Darnel Chancellor a.k.a. Kam Chancellor is a retired American football strong safety who played for the Seattle Seahawks of the National Football League (NFL) for his entire career. He finished his collegiate career at Virginia Tech and was drafted by the Seahawks in the 5th round of the 2010 NFL Draft. He announced his retirement in 2018 following complications from a severe neck injury he suffered the previous season.

Norfolk, Virginia native, Kam Chancellor was born on 3rd April 1988, under the star sign Aries. By nationality, he is an American and belongs to the Afro-American ethnic background. The thirty-two years old stands 6 ft 3 in (1.91 m) tall and weighs 239 lb (108 kg).

Kam Chancellor is married to a model and actress, Tiffany Luce. The couple started dating a long time ago and got engaged in November 2016. On 17th November 2013, Kam and Tiffany tied the knot in Los Angeles. 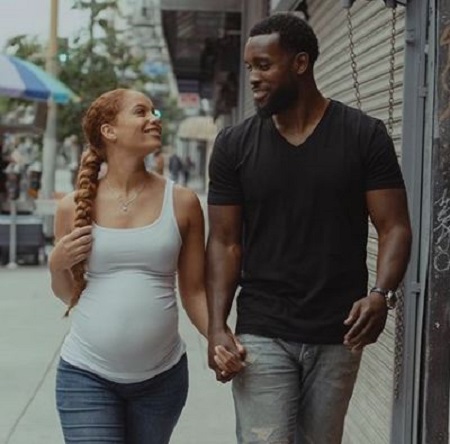 In 2019, the pair announced they are expecting their first child. Tiffany shared several photos flaunting het baby bump. Nevertheless, the couple chose to keep it low key when it comes to their baby.

Kameron was born to a single mother, Karen Lamber who worked multiple jobs to support her five children. Chancellor grew up in poverty: his family never had enough money but made sure he and his siblings stayed off the street and away from violence. In 2014, after Kam signed $34 Million contract with the Seahawks, gifted his mom a home and a Lexus.

Kameron enrolled at Matthew Fontaine Maury High School where he played basketball and football. As a senior, he recorded more than 2,000 passing yards and 500 rushing yards and led his team to a 10–2 record and an appearance in the Group AAA Division 5 playoffs. Also, he was named the most valuable player. Upon graduation, he attended Virginia Tech, majoring in human development. There he played as a quarterback before eventually being moved to the cornerback position prior to the start of the season.

At the 2010 NFL Draft, Kameron was picked by the Seattle Seahawks in the fifth round (133rd overall), becoming the second safety the Seahawks drafted in 2010 and was the ninth safety selected overall. He made his professional regular-season debut in the Seattle Seahawks' season-opening 31–6 victory against the San Francisco 49ers. His career highlights include Super Bowl champion (XLVIII), 4× Pro Bowl (2011, 2013–2015), and 2× Second-team All-Pro (2013, 2014).

In September 2018, Chancellor revealed that he had spinal stenosis and bone spurs in his neck. On May 9, 2019, the Seahawks terminated Chancellor's contract after a failed physical.