Kaare Babajide Vedvik, professionally known as Kaare Vedvik, is a well Known Norwegian professional football player. The athlete serves as gridiron football placekicker and punter for the Saskatchewan Roughriders of the Canadian football League. The Norway international represented and committed to playing his college football at Marshall. He is one of the Norwegian nationality competeting in the Canadian Football League.

Kaare Babajide Vedvik, the Saskatchewan Roughriders player, was also a member of several National Football League (NFL) teams such as the Baltimore Raven and New York Jet, Cincinnati Bengals, Buffalo Bills and many more. He remained undrafted in the 2018 NFL Draft but; was later signed by the Ravens as an undrafted free agent. Kaare is one of the most popular Norwegian football players in the world.

Former Baltimore Ravens football star Kaare Vedvik was born on 16 March 1994 in Stavanger, Noway. As per the astrologers, the placekicker zodiac sign is Pisces, and his age is just 28 years old as of 2022. Kaare put on jersey number 70 on his back for the Saskatchewan Roughriders. His roster status is active, and his CFL status is global.

Talking about his physical appearance, the former NFL star player Kaare Vedvik stands tall at 6 ft 3 inches or 1.91m and weighs over 95 kg of 210 lb. The footballer has a well-maintained healthy body. Further description, Kaare has a light brown skin complexion and has a long shredded built boy structure. In addition, the punter has short black air and a beard.

The 6 ft 3 inches tall, 95 kg kick taker Kaare is of Nowerigain nationality. However, Kaare hasn't publicized any other facts about them anywhere. So, still under the radar. The footballer was born to a Nigerian father and a Norwegian mother. He was born in a family where football was everyone's favorite. He was mixed racial from Nigeria and Norway. He was born and raised in Norway. His father still has close ones and relatives in Nigeria. 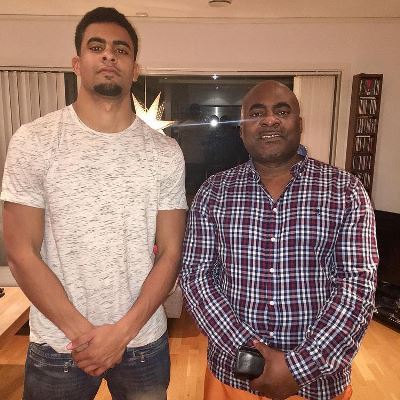 After his parents exchanged the wedding vows, they determined to settle in Norway only. Kaare is very close to his parents and loves to spend more quality time with them. The punter quite often goes to visit them in his leisure time. His family has been the greatest support and inducement in his football career as they were very aware of thier son's interest, passion and love for football. They almost attend Kaare's game and cheer him up.

The Vedvik family is a family of five. He is not only the son in his family. Along with him, Kaare has siblings, brother and sister. They are Aleksander Vedviksa(brother), and regardless, he hasn't mentioned anything about his younger sister. 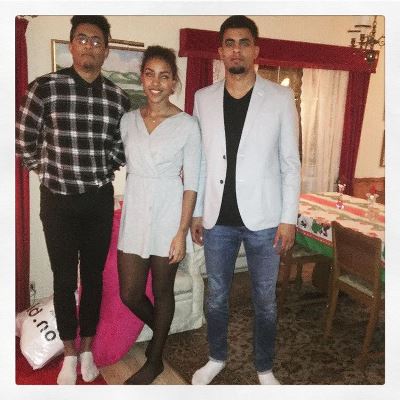 These three siblings have a very strong bond. Vedvik also quite often shares thier photograph on his Instagram.

All C-USA First Team(2017) Vedvik initially started his football journey when joining the Stavanger-based AFC show in 2011. He wished to play as wide receiver during his amateur period, but his coach McPherson discovered he was a better fit to play kicker. After completing his schooling, the Norway international joined Marshall in 2013 for further higher studies. He represented Marshal University in several college tournaments. He was one of the crucial players form the team.

After his redshirt, he served as a Marshall's kickoff specialist in 2014. His performance is quite remarkable that he was named the Conference USA Special Team Player of the Week on 1 November 2016. In college stats, he holds the record of 7th longest in FBS history and the longest since 1972. P

professionally, he kicked off his football career in 2018 when the Baltimore Ravens signed him as an undrafted free agent. At Ravens, he made all four of his field goals, including a 55-yard try. After that, Stavanger-born punter was bartered to Minnesota Vikings on 11 August 2019, after being picked in the fifth round of the 2020 NFL Draft. Likewise, he moved to New York Jets and Cincinnati Bengals in the 2019 season. After his departure, Kaare joined Buffalo Bills signing a reserved contract in 202.

Shortly after the contract expired, the Norwegian nationality was claimed off waivers by Carolina Panthers in August 2020 and Washington Football team in October 2020. Later on 15 April 2021, Kaare got drafted by the Saskatchewan Roughriders on 3 September 2021 in the 2021 CFL Global draft.

After that, he joined the Jacksonville Jaguars, and then again, he moved back to his former team, Roughriders, on 10 October 2021.

Who is Kaare Vedvik dating? Martial status and love affairs

Regarding love life matters, Kaare the Roughriders jersey number 70 is very confidential. There are no rumors or news regarding his relationship status. Addtionally, he also has not been seen with any girls or company publicly; thus, it remains a mystery.

As of today, he is utterly dedicated and focused on his career. It is unsure whether he may be dating someone privately or waiting for the right time to reveal his love life to the public.

Thus, Observing his life on social media, he is believed to be single at the moment.

Kaare Vedvik's career earnings, salary and net worth in 2022

As per the source, Vedvik has around $3Million, including his house, cars and properties. The 28-year-old footballer is one of the well-established and well-earning players in the CFL. He has played for several teams in his NFL tenure, such as Baltimore Ravens, New York Jets, Cincinnati Bengals, etc. He mostly boosts up his net worth via his football carer.

As per salary sport, when the Ravens drafted him in 2018, Vaare credited his bank balance with a cap cut salary of $6,10,000 yearly with a $4000 signing bonus.  Likewise, his salary figures have grown over time. He gets pay of $7,80,000 yearly as a Roughriders player. All credits go to his hard work and commitment; the footballer lives a healthy and lavish life. On top of that, he also has other means of income sources like sponsorship, commercial ads and endorsement deals. Although, ex Jets player has not revealed how much he nets from that transaction. The 6 ft 3 inches tall athlete is also one of the highest-paid footballers in the Canadian Football League.

Kaare Babajide Vedvik is one of the popular Norwegian footballers. He seems to be social media fanatic, especially on Instagram. He is a regular Social media user. He has a verified Instagram id named @vedvikk and has followers of more than seven thousand.

He also has a Twitter id known as @ Kare Babajie Vedvik and is verified with a blue tick. The punter also has large fan followings on Twitter as well. Via these social media, Vaare updates his sports news and events to his fans and following. It is also a medium of promotion of his sponsors and brands.