K. L. Rahul is an Indian cricket player who plays as a right-handed batsman and occasional wicket-keeper. Currently, he plays for India in international cricket team and is also a part of Indian domestic cricket for Karnataka state. Likewise, he plays for Kings XI Punjab in Indian premier league(IPL). K. L. Rahul made the record of fastest 50 off 14 balls in the history of IPL against Delhi Daredevils.

Currently twenty-six, K.L. Rahul has an estimated net worth of $4 million in 2019 with an annual salary of $2.3 million. Regarding his personal life, he is currently in an open relationship with his girlfriend, Elixir Nahar.

Look up, get up and never give up! #neverlookback #teamindia

In 2014, he was bought by Sunrisers Hyderabad for Rs 1 crore. In the 2018 IPL Auction, Rahul was bought by Kings XI Punjab for 11 crores, that the joint-third highest price for that year.

K.L. Rahul also owns a house in Mangalore of India. He is fond of luxury cars and buys well financial cars such as Kl 01 BH, and Claz. K.L. Rahul has 4 cars worth Rs.2.5 Crores and also has a house bought for around Rs. 65 lakhs.

Rahul is a brand ambassador for CURE-FIT. Currently, CULT has 17 fully functional fitness centers all over Bengaluru, where they trained more than 7,500 people and gained a monthly income of $150,000.

Who is K.L. Rahul's Girlfriend? 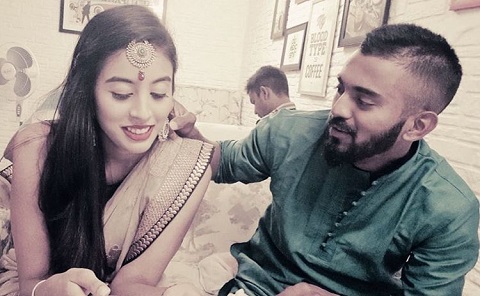 However, back in 2018, the couple broke up but friends insist that both Rahul and Elixir are back with each other.

Rahul was also rumored to be dating Bollywood actress Nidhhi Agerwal in 2018. The couple later denied the rumors and termed themselves as 'friends'.

Who is Elixir Nahar?

Elixir Nahar is an Indian model who also appeared on the promos for Ticket Genie, the official ticketing partner of Royal Challengers Bangalore. She is also an anchor and marketing associate.

In addition, she has also worked at GQ India and DNA News as an editorial intern.

Rahul was born as Kannanur Lokesh Rahul into a Kannadiga family to K. N. Lokesh and Rajeshwari on April 18, 1992, in Mangalore. He was brought up in his hometown along with his younger sister Bhavna.

His father Lokesh is a professor and acting director at the National Institute of Technology Karnataka in Surathkal whereas his mother Rajeshwari is a history professor at Mangalore University. By nationality, Rahul is an Indian and belongs to South-Asian ethnicity.

According to his father Lokesh, Rahul began playing cricket at the age of 11. When he K.L. was 18 years old, he went to Bangalore to study at Jain University and pursue his cricket career.

Rahul made his cricket debut in the 2010–11 season, playing first-class cricket for Karnataka State. At the time, he also represented his country India at the 2010 ICC Under-19 Cricket World Cup.

During 2014–15 season of Duleep Trophy, K.L Rahul played for South Zone against Central Zone, where he scored 185 off 233 balls in the first innings and in second innings he scored 130 off 152. However, his contribution went in vain after South Zone defeated by nine runs. For this contribution, he was awarded man of the match award and he was selected for Indian Test squad for the Australian tour in December 2014.

Rahul made his test debut against Australia on 26 December 2014 at the Melbourne Cricket Ground. In his debut match, he replaced Rohit Sharma and received Test cap by MS Dhoni. In the first inning, he came to bat at number 6 and made 3 runs. Likewise, in second innings he played at number 3 and made only 1 run.

During the fourth test, he opened the inning along with Murali Vijay and made 110 runs at Sydney Cricket Ground, which became his maiden international hundred. He has altogether 4 test century and 10 fifties with a strike rate of 56.42.

Similarly, Rahul made his One Day International (ODI) debut on 11 June 2016, against Zimbabwe and scored a century, becoming the first Indian cricketer to do so on debut. He has scored 1 ODI century and 1 fifties with a strike rate of 80.78.

Rahul made his Twenty20 International (T20I) on 18 June 2016, debut against Zimbabwe at Harare Sports Club. In his debut match, he was dismissed for a duck, the first time an India batsman has been out the first ball in a T20I match. He has scored 1 T20 century and 3 fifties with a strike rate of 146.63.

Following controversial comments on the Indian talk show Koffee with Karan on 11 January 2019, K. L. Rahul and his mate Hardik Pandya were suspended by the Board of Control for Cricket in India (BCCI)

The two were sent home before the ODI series against Australia and the fixtures of India's tour to New Zealand. Upon lifting the suspension on Pandya and Rahul, the BCCI announced that Rahul would re-join the squad for India A matches.

In 2013, Rahul made his debut in the Indian Premier League, playing for Royal Challengers Bangalore as a wicket-keeper batsman. In 2014, he was bought by the Sunrisers Hyderabad for Rs. 1 crore at the auction.

After a couple of years, he returned back to the Royal Challengers Bangalore. He finished the 2016 season by scoring  397 runs from 14 matches. He missed the 2017 season due to a shoulder injury.