Justin Simmons is an American football free safety who is currently signed to the Denver Broncos of the National Football League (NFL). The hunk finished his collegiate career at Boston College and was picked by the Broncos in the 2016 NFL Draft with the 98th pick in round three.

2019 Second-team All-Pro, Simmons was born on 19th November 1993, in Manassas, Virginia. His star sign Scorpio. By nationality, he is an American who came from a Afro-American ethnic background. The twenty-seven years old stands 6 ft 2 in (1.88 m) tall and weighs around 202 lb (92 kg).

Besides, he is a founder of Justin Simmons Foundation which is dedicated to mentoring young people, promoting the benefits of youth sports, supporting youth education, and other charitable causes.

Justin Simmons' Wife: Is He Married?

Justin and Taryn are high school sweethearts. The couple started dating in their junior year of high school. Following a full college experience dating long-distance, Justin proposed to Taryan in June 2015. Junior year of college is when Justin brought up talk of marriage with Taryn to his own parents. Eventually, the couple tied the knot in 2016. 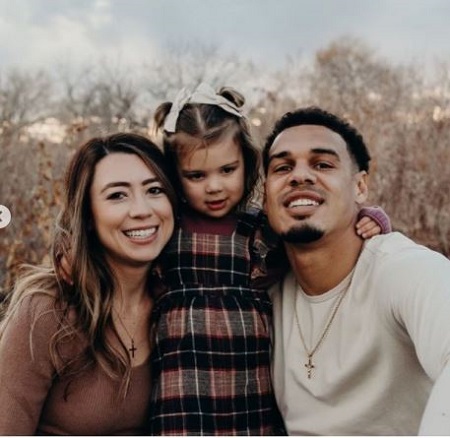 On 11th May 2018, Justin Simmons and his wife, Taryn Simmons, welcomed a new member to their family, a beautiful baby girl, Laney Rae Simmons. Denver Broncos Safety often posts his family pictures of his IG.

From Boston College To NFL

Simmons enrolled at Boston College where he played both safety and cornerback. During his freshman season, he appered in all 12 of the Eagles games and in all 13 games as a sophomore. In 2014, he started all 13 games, the first seven at free safety and the final six at right cornerback as a junior. In the final season, he started all 12 games at free safety. He was named to Steele's All-American Fourth Team and ProFootballFocus.com All-America honorable mention.