Justin Donovan Houston a.k.a. Justin Houston is an American football defensive end who is currently signed to the Indianapolis of the National Football League (NFL). He finished his collegiate career at the University of Georgia, earning All-American honors. He was selected by the Kansas City Chiefs in the 3rd round of the 2011 NFL Draft, was played until 2018.

4× Pro Bowl, Justin Houston was born on 21st January 1989, under the star sign Aquarius. He holds an American nationality and is of Afro-American ethnic background. Regarding his physique, he stands 6 ft 3 in (1.91 m) tall and weighs 270 lb (122 kg).

How Much Is Justin Houston's Net Worth? Salary & Contract

Indeed one of the rich NFL players, Justin Houston has an estimated net worth of over $50 million as of 2020.

Justin Houston's Wife: Is He Married?

Indianapolis Colts' defensive end is married to Jonisha Garner, whom he met after graduating school and started dating shortly after. Unlike other wags, Garner has maintained a low-key personal life. There is no flaunting love and lifestyle in the socials.

Houston and his long-time girlfriend made their steadfast love official in 2014. The pair became engaged in 2015 when they traveled to London for a Chiefs game, while out to dinner at upscale steakhouse MASH with family in tow. There, Houston got down on one knee and asked the love of his life to marry him all over again, promising her the fairy-tale wedding she deserved. 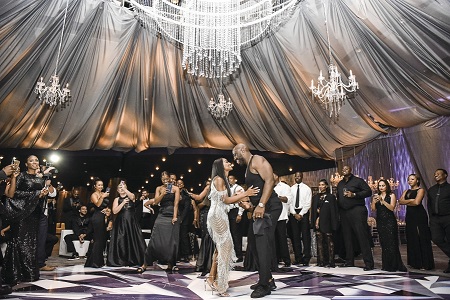 Houston and Garner tied the knot in 2018, in a lavish wedding ceremony and throw the glamorous fete of their dreams at the Georgia Aquarium. The bride and groom purchased their custom rings from AJ’s Jewelry in Miami.

The couple is now the parents of two sons.

At the 2011 NFL Draft, Justin Houston was selected by the Kansas City Chiefs in the third round with 70th overall pick, becoming the 9th linebacker drafted that year. He made his NFL debut in the season-opener against the Buffalo Bills and made two solo tackles during their 41–7 loss.

After playing eight seasons for the Chiefs released him on 10th March 2019. On 21st March 2019, Houston signed to the Indianapolis Colts.

Justin Houston is the son of Kimberly, a single mother who raised him with the help of his grandmother, Linda Houston. His father was not involved in his life as a child, as it appears he left his mother, to cater for 11 Children. He has 10 siblings.

For high school, Justin enrolled at Statesboro High School where he was a two-time All-Region selection and All-State honorable mention. a four-star recruit by Rivals.com, Houston finished his collegiate career playing at the University of Georgia. He forgoes his senior season to enter the 2011 NFL Draft.