Justin Patrick Herbert, simply known as Justin Herbert is an American football quarterback who is currently signed to the Los Angeles Chargers of the National Football League (NFL). He finished his collegiate career at Oregon Ducks where he was named Rose Bowl MVP 2020. He was selected by the Chargers 6th overall in the 2020 NFL Draft.

How Much Is Justin Herbert's Net Worth? (Salary & Contract)

Projected Salary As Per The Deal

Justin Herbert is yet to come out openly regarding his love life, However, being at the peak the QB has reported to romantically link. Earlier, he was rumored to be dating Sabrina Lonescu, a fellow Ducks basketball player. Well, the buzz turned to be a hoax. 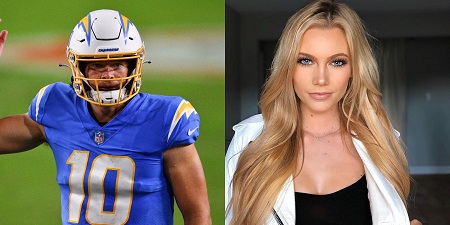 He is now rumored to have romantically involved with Rylee Jean Kirk, a Los Angeles based model. Reportedly, both follow each other on IG, but none of them has confirmed the relationship.

At the 2020 NFL Draft, Herbert was picked 6th overall by the Los Angeles Chargers in the first round, becoming the 3rd quarterback picked that year. On 20th September 2020, he made his NFL debut in Week 2 against Kansas City Chiefs where he had 311 passing yards, one touchdown, one interception, and one rushing touchdown in the Chargers' loss by 20-23.

He was named the 3rd player in NFL history to pass for at least 300 yards and rush for a touchdown in his first career game. For his performance in November, he was named the Offensive Rookie of the Month.

Justin Herbert is the son of Mark Herbert and Holly Herbert. Herbert enrolled at Sheldon High School, where he played football, basketball, and baseball. He suffered a broken leg in his junior season which complicated his recruitment process. On 9th October 2015, he committed to the Ducks.

Along with excellent sports records he graduated with a bachelor's degree in biology with a 4.01 grade-point average on a 4.3 scale and was awarded the 2019 William V. Campbell Trophy, which recognizes excellence in academics, athletics, and leadership.

His younger brother, Patrick also attended the University of Oregon as a tight end for the Ducks. What's more, their grandfather, Rich Schwab, played receiver at Oregon in the 1960s.