Jurriën David Norman Timber, aka Jurrien Timber, is a Dutch football player that plays for Ajax—known for his formidable defense, the center-back is only 21 years old. The youngster has also established himself as one of the best players on the Dutch side.

Most defenders must be older and on the bigger side to tackle and intercept the strikers. Despite this requirement, Timber (Tim) is great and has an even more significant potential for being a star defender. The center-back has also won many awards, including player of the year and talent of the month.

Jurrien Timber, aka Tim, was born on June 17, 2001. He had a six-person family, including five brothers. Tim had another twin brother, Quentin. The Duo was born in the city of Utrecht, Netherlands. His mother, Marilyn, raised the boys with unconditional love and support throughout childhood.

Brothers are best friends with each other. This fact held to the twins Quentin and Jurrien. They remained inseparable throughout childhood, dressing the same, sitting together, and sharing their room. The duo even shared the same passion for soccer.

The twins were famous in the neighborhood because of their twin status and football skills. Such football talent could not be ignored, and Marilyn went on to support the kids. The duo began their football career with a good foundation due to the support of their mother.

They were studying, how good were they?

Despite being a single mother, Marilyn ensured her children received a quality education and were raised correctly. Marilyn was a religious person, and she enrolled them in a Catholic school. Jurrien and Quentin attended the De Spits Primary School located in Bunnik Utrecht.

The duo would always be seated together and would dress the same. This made them indistinguishable from the teachers, and they would have a difficult time. They would wear different colored dresses for the teachers to help them seperate who was who.

Jurrien was good at both studying and sports. According to his twin Quinten, Jurrien often got good scores, although Quinten was the one that would study more often. The brothers never had higher education due to their football careers.

Timber is aged 21 and weighs around 79 kilograms(174 pounds). The youth plays as a defender despite being very young. Generally, defensive roles are for the people that are a bit older and bulker to stop the strikers on their tracks. Being marked as a defender at this age shows enormous potential in the future.

The Dutch have given birth to many great defenders like Aron Winter, Ruud Krol, Ruud Gullit, Frank de Boer, Virgil van Dijk, and Jaap Sta. Being compared to them is a tremendous existing feat in itself. This is probably why he has a robust body looking atheletic and fit.

Career aside, Jurrien likes to listen to music and play games. He enjoys playing board games like dominoes. Jurrien prefers hip-hop and Caribbean songs that come from their parent's birthplaces. Tim likes to listen to Drake, Lil Baby, and Dutch singers like Broederliefde and Jonna Fraser. 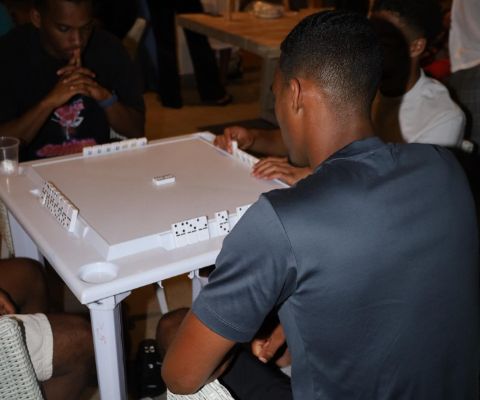 CAPTION: Jurrien invested in his board game source: foottheball.com

As his twin brother Quentin said, Jurrien often talks in his sleep.

The Twins are Gemini. Gemini often tends to be expressive and quick-witted. They are mostly quick to change moods but are sociable, communicative, and always ready for fun. Geminis are very lively, and finding a dull moment with them is rare.

The Duo both adore Messi a lot. They're big fans of the GOAT footballer.

Net worth and Salary, How much does he own?

Footballers have a lot of salaries as it is a huge industry worth billions. The center-back is paid around twenty-four thousand dollars weekly according to salarysport. This is a massive sum that makes him a millionaire every year. He also has an impressive 45 million $ market value in the transfer market. 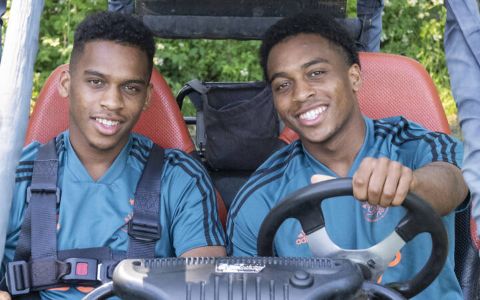 CAPTION: Jurrien Timber and his Twin Quentin on a caddy SOURCE: expattd.blogspot.com

Despite this vast paycheck, Jurrien lives a very modest and humble life. The most he is seen having is a fancy-looking bike. It is not fully mechanical but is still a great alternative to motorbikes and cars. The closest he is seen to a car is a caddy that he drove around with his twin in it.

Jurrien's family has a long history. Her mother, Marilyn, used to live in Curacao. She was born there and grew up in a strict Afro-Curacoan family of five children. They were strictly Catholic, so Marilyn was introduced to Christian songs. She fell in love with music and dance. Due to this, she got the opportunity to showcase her dances in the Netherlands and Europe.

She found out how easier life was in the Netherlands compared to Curacao. She decided to stay there to study and even got a scholarship in Amsterdam for dance. She began to teach aerobics for expenses as something went wrong with her scholarship.

Marilyn invited her boyfriend in Curacao to the Netherlands, where they married. She gave birth to her sons Christopher and Shamier here. Jurrien wasn't born yet; there's still a lot of story to it. After a while, something led to a divorce between the couple, and they got seperated.

Without losing her commitment to dance, she later met another love through dance, and they got married. It was with him that she had Dylan and the Twins, Jurrien, and Quentin. Christopher and Shamier were not their real brothers but step brothers (they shared a parent). Yet they still were as close as real ones.

Things turned unfortunate again when the twin's dad decided he wanted to move back to curacao to live a warmer life. At first, it was only temporary, but he never returned. This was another devastating news as now she had two but five sons to take care of. During these harsh times, her sister June Timber helped her a lot. This is why the kids took their mother's last name.

Presently, Quentin plays football for his hometown Utrecht FC as a defender. His brother Dylan plays at the same club as a center-back (born in 2000). It seems like all of the siblings were born to play defensively. Their half brothers did, too, try football. Christoper likes to be known as the brother who introduced soccer to the young lads. With an 11-year age difference from Jurrien. The half-brother works in IT and has a relationship with a Dutch.

The other half, Quentin, was known to be the best football player in their family before the twins. Even Utereh FC was interested in him. As time passed, he did not find football to be for him and entered the IT field. Quentin also proposed to Marisol, his girlfriend, back in early 2022.

With footballers and IT professionals in the family, Marilyn and the brothers could not be more proud of each other for sticking together and being what they are today.

Is Jurrien Married? Does he have a girlfriend?

Gossips for the young lad's relationship statuses have been booming since his career started. Jurrien is very handsome and young, so the question about his relationship status course will be gossiped about. Let's see what we can find from the center-back gossip.

Jurrien is not assumed to be in a relationship at the moment. He is very private about his love life, so we wouldn't know if he had one unless someone spots him with his girlfriend. He is identified as straight. So far, we have many rumors and speculations only.

Due to the constant support from the twin's mother, the duo and Dylan had a good football foundation. They were enrolled at DVSU academy at the age of four. 2 years later, they moved to Feyenoord academy. Feyenoord was closer to the other academy for Marilyn to observe the kids.

The twins were also on the school football team. They were an essential asset to the team and were the top performers. There were times when the games for Feyenoord and School overlapped, so they had to appear in one or another.

The big move came in the year 2014 when the brothers joined Ajax. Ajax was Feyenoord's competitor, which definitely sparked disappointment and was not received positively. The duo had a hard time in the first year of Ajax as they frequently suffered from injuries. They underwent severe training and coaching to start showing better results finally.

The twins who used to play for Ajax's reserve team Jong Ajax were finally seperated after Quentin was taken away by FC Utrecht. They now play for their respective teams.

Jurrien has played 115 games for Jong Ajax and Ajax during his career. He has also scored four goals as a defender for the leading team, Ajax.

The twins were called for their first national game at the U-17 level. This was a considerable achievement to be on the Netherlands U17 team. They were then called to partake in the 2018 UFEA European U17 Championship. They proceeded to win the championship against Italy in a penalty shootout. Jurrien was responsbile for the 1 - 0 victory. Timber was also selected for the 2020 UEFA Euro Cup. The center-back made his debut for the team on June 2, 2021, in a friendly game against Scotland. He has appeared in 6 international matches, with his biggest one coming with the 2022 World Cup.