Joshua Bailey a.k.a. Josh Bailey is a Canadian professional ice hockey winger. As of 2019, he plays for the New York Islanders of the National Hockey League (NHL). He was picked 9th overall by the Islanders in the 2008 NHL Entry Draft and has played with the team since.

The twenty-nine-year-old ice hockey winger stands 6 ft 1 in (185 cm) tall and weighs around 190 lb (86 kg; 13 st 8 lb). Reportedly, he earns $6 million per annum as salary from his team and has an estimated net worth of $10 million. Furthermore, he is married and shares three children with his wife.

How Much Is Josh Bailey Net Worth In 2019? Know His Salary and Contract

As of 2019, he has an estimated net worth of $10 million, mostly earned through his NHL Career.

His salary throughout 12 seasons:

With a tremendous net worth and earnings, he is living a lavish lifestyle. However, there is no information about his real estate properties and cars.

Is Josh Bailey Married? Know His Wife and Children

Josh Bailey is a married man. He tied the knot with his girlfriend, Megan, on 6th August 2006, in a secret wedding ceremony. Moreover, he shares two children with his wife. 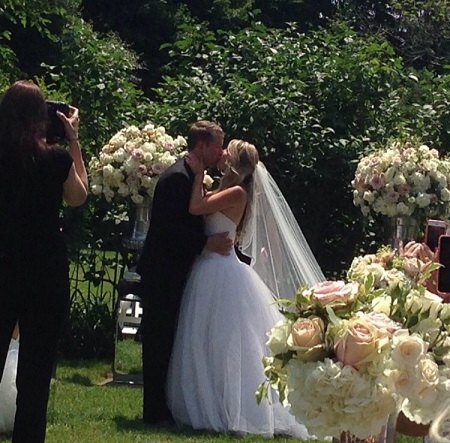 Though Bailey remains silent in social sites, his wife and children often visit to support him during the games. Matter of fact, he has set his Instagram account private while his wifey often seen flaunting their family pictures via her official social.

I think this is the first documented photo with all 5 of us in it! Only took us a year + a half! Happy Easter + Happy Birthday to our main man @joshuajbailey!

As of now, the family of five is living a blissful life.

A native of Bowmanville, Ontario, Canada, Josh Bailey was born on October 2, 1989. His star sign is Libra. As per nationality, he is a Canadian. There is no information available about his parents and siblings.

Initially, he played AAA for the Clarington Toros of the Ontario Minor Hockey Association's (OMHA) Eastern AAA League. In May 2005, he was selected in the first round of the Ontario Hockey League (OHL) priority selection by the Owen Sound Attack. During the 2006–07 season, he was traded by the Attack to the Windsor Spitfires.

In the 2008 NHL Entry Draft, Bailey was drafted 9th overall by the New York Islanders. On October 2, 2008, his 19th birthday, the Islanders signed Bailey to a three-year, $900,000 contract. However, his debut was delayed by an injury sustained during a preseason game. On January 2, 2009, he scored his first goal in the league against Ilya Bryzgalov of the Phoenix Coyotes.

On February 23, 2018, Islanders signed him to a six-year contract extension.

Recently on 10th April 2019, he scored his first Playoff NHL overtime winner over the Penguins. His famous teammates include Andrew Ladd, Anders Lee, and Casey Cizikas.

On April 16, 2018, was named Team Canada's senior team, replacing Vince Dunn, that will compete at the 2018 IIHF World Championship.