Jordan Thompson is an Australian tennis player who reached a career-high ranking of world number 43 as of 15 July 2019. At the 2014 Australian Open, he made his Grand Slam debut. Further, he reached his first ATP Tour quarterfinal at the 2017 Brisbane International, defeating David Ferrer en route.

Sydney, Australia native, Jordan Thompson was born on 20 April 1994, under star sign Taurus. The twenty-five years old an Australian nationality and is of caucasian ethnicity.

Jordan Thompson has made a fortune through his career as a tennis player. As of 2020, his net worth is around $2 million. To date, he has summoned $2,228,346 as his career earning. 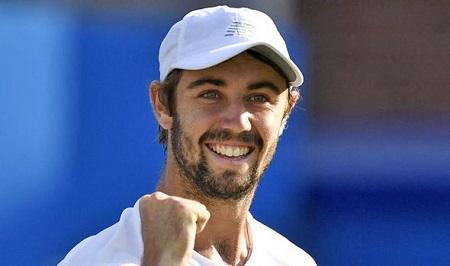 Thompson's net worth is expected to increase in upcoming days as his career progresses.  He is yet to make his mark in tennis. He has also been sponsored by brands like New Balance tennis.

Professional tennis player Jordan Thompson hasn't married yet. Moreover, he is not dating anyone at current. There are no records of Thompson's past relationships.

Jordan Thompson has kept his dating life under the wraps so far. It doesn't seem that he has a girlfriend at the moment. Although Thomspon hasn't married yet and isn't dating anyone in his life, his sexuality is straight.

Jordan Thompson was born to Karen Thompson and Stephen Thompson. Thompson's father was a tennis coach and his mother was a superannuation company.

Thompson grew up along with his sibling sister Karlie. From the age of 4, he started playing tennis with his father. Thompson completed his graduation from Oakhill College in Australia.

During his junior career, Thompson reached the finals of US Open along with his partner Nick Kyrgios and was ranked no. 18. He started his professional career from 2013 Apia International Sydney but lost the match to Guillermo Garcia Lopez. However, Thompson won his first professional match in the Australian Open.

In 2014 Jordan Thompson played  2014 Brisbane International but ended the journey within the first match. He lost both the  2014 AAMI Classic and 2014 Australian Open. Moreover, Thompson was able to reach up to semifinals of China International Challenger. The same result continued in his 2015 career. He was able to win his first Challenger Doubles title with Ben Mitchell at Shimadzu Challenger.

In 2016 Jordan Thompson reached the semifinals in his first tournament at New Caledonia. Thompson won his first ATP Challenger title at  La Mache Challenger. Furthermore, he also won his first main draw grand slam match against in French Open. Thompson lost in round 1 to Kyle Edmund at the 2016 Summer Olympics.

In 2017 Jordan Thompson was able to reach the ATP tour quarterfinals of 2017 Brisbane International but got defeated by Kei Nishikori. However, he became the first Australian player to win the Brisbane International double along with his partner Thanasi Kokkinakis. Thompson recorded his first Australian Open win defeating Joao Souza in the first round however, he lost to Dominic Thiem in round 2. During his Queen's Club Championships Thompson defeated world number one Andy Murray. He won his first grass on the ATP World Tour.

As of 2018, Jordan Thomspon lost the first round of Brisbane International, Sydney International, French Open, Wimbledon and Australian Open. He made it to two consecutive Challenge tours finals in Chennai and Kyoto. Thomspon recently reached the quarterfinal of Challenger Fairfield, US but lost to Bjorn Fratangelo.

The Australian tennis player, Jordan Thompson has a perfect height of 1.83 m. Besides his profession, he loves playing rugby. He is a fan of the National Rugby League whereas his favorite team is Wests Tigers. Thomson's favorite player is Brett Hodgson. He has quite a fan following on his social media accounts like Instagram and Twitter.