Jonas Omlin is a Swiss professional footballer who plays as a goalkeeper for Ligue 1 club Montpellier and Switzerland team. Omlin won the Swiss Cup in the 2018-19 season playing for his team FC Basel.

Omlin was born on January 10, 1994 in the beautiful town of Sarnen, Switzerland, where he grew up with his parents. Montpellier's goalkeeper's parents have been supportive of him at every step of his career. So, Omlin has been playing football professionally since 2012.

Jonas Omlin's Net Worth and Earnings In 2022

Omlin has signed for Montpellier from FC Basel club. Being a football player, he makes a reasonable sum of money. According to the sources, his net worth is estimated to be around $3 million. According to Salary Sport, Omlin's weekly salary is £19,000 and his yearly salary is £988,000. Montpellier's goalkeeper signed a contract with Montpellier on August 15, 2020, which will last until June 30, 2024. Omlin received a massive deal worth €6 million. Before that, Omlin has also played for FC Basel and his deal with the team was €2 million.

Is Jonas Omlin Married? Who is his Wife?

Yes, Montpellier is a married man. Aside from his professional life, Omlin is married to his beautiful wife Janice van Eck. The lovely couple had been dating for a long time and finally married in the presence of their family and friends reportedly in 2020. 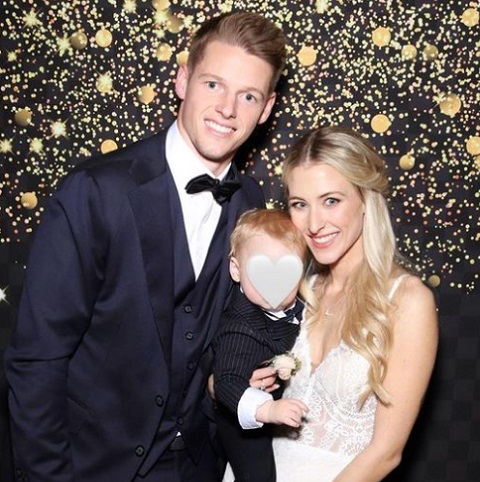 Jonas Omlin has a son with his wife  SOURCE: Instagram @omlinjonas1

The couple is also blessed with a son named Lio. Omlin and his wife Janice have often been seen visiting different places during their vacations, and there is more to come for this beautiful couple. Janice has always supported him in every journey he has today.

Growing up in Sarnen, Montpellier goalkeeper was passionate about football from a young age; Omlin has grown into a fine player playing football in his schools. Omlin played for the Kriens in the 1. Liga Promotion and moved to Luzern.

The Montpellier goalkeeper signed to FC Basel from Luzern in 2018, where he had his debut match bearing a loss against St. Gallen. During his seasons in Basel, the club won the Swiss Cup in the 2018-19 season. After having great results in Basel, Omlin transferred to Montpellier on August 15, 2020.

Montpellier's goalkeeper has been named to the national team for the 2018-19 UEFA Nations League but did not play a single game as his team finished 4th in the overall league, and during his Euro 2020, Omlin suffered an ankle injury which led him to be replaced.

On October 7, 2020, Montpellier made his senior team debut in a match against Croatia. Not to mention, Montpellier is also one of the goalkeepers listed in the Swiss team playing in the FIFA World Cup 2022.

Omlin currently has 25.4K followers on Instagram. He is famous on Instagram with a good number of posts. Montpellier, goalkeeper keeps posting about his life and the training with the boys and the club.

He loves hanging out with his family. His Family have been his prime supporter. You can check out Omlins's Instagram on @omlinjonas1.