Johnny Boychuk is a Canadian professional ice hockey player who plays in the National Hockey League (NHL). As of 2019, Johnny Boychuk plays for the New York Islanders as their defender. Prior to that, Johnny Boychuk has played for other teams like Boston Bruins, and Colorado Avalanche.

As a defender, Johnny Boychuk reportedly earns around $6,000,000 as his yearly salary from New York Islanders. Further, Johnny Boychuk has an estimated net worth of over $17 million. Additionally, he is happily married to his beautiful wife, Sheena Burletoff.

Johnny Boychuk Net Worth And Salary

As per the reports, Johnny  Boychuk is married to his beautiful wife Sheena Burletoff in 2011. However, the detailed information about their wedding is still behind the rock. The spouse looks adorable together. Since they are together for this long, the duo's charm of love hasn't decreased a bit. 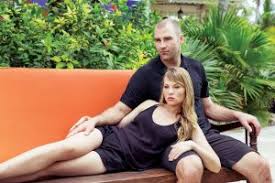 Further, the couple is blessed with two twin daughters. Despite a busy schedule, Johnny Boychuk manages to spend quality time with his wife and his two lovely daughters.

Additionally, the couple is living a happy life without news of divorce or separation in recent time. Further, he hasn't been linked with any past rumors regarding relationship or affairs in the media yet.

Johnny Boychuk was born on January 19, 1984, in Edmonton, Alberta, Canada to parents John Boychuk and Audrey Boychuk. As per his nationality, he is Canadian and belongs to the white ethnic group. Further, his star sign is Capricorn.

As a youth, Boychuk played with a minor ice hockey team from Edmonton at the 1997 Quebec International Pee-Wee Hockey Tournament.

Boychuk was drafted by the Colorado Avalanche in the 2002 Entry Draft of the National Hockey League (NHL). He made his NHL debut against the New York Islanders in the 2007-08 season on January 5, 2008.

Boychuk scored one goal and two assists against the Carolina Hurricanes in his Islanders debut. He signed a seven-year contract extension of $42 million with the Islanders on March 12, 2015, lasting through the 2021-22 season.

Currently, he is playing along with his star team-mates such as Cal Clutterbuck, Luca Sbisa and many more.