John Schneider is an American professional baseball coach who currently serves for the Toronto Blue Jays of Major League Baseball (MLB). Before pursuing a coaching career, he played six seasons in the Blue jays minor league organization as a catcher.

Princeton, New Jersey native, John Schneider was born on 14th February 1980, under the star sign Aquarius. he holds an American nationality and is of white ethnic background.

How Much Is John Schneider's Net Worth In 2020?

John Schneider is currently serving as a coaching staff of the Blue Jays. According to the source, his salary is no less than $100,000 per annum from the organization. In the coaching field since 2008, he started as a catching instructor later becoming a manager for various minor baseball leagues team. 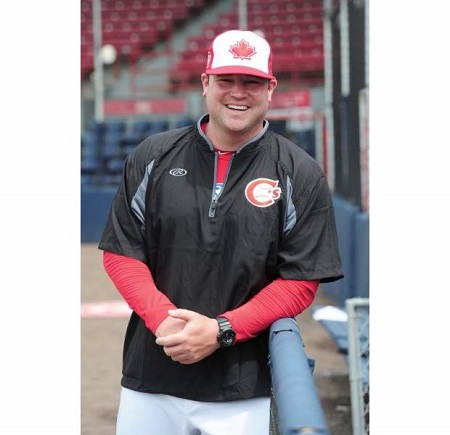 Before becoming a coach he spent six seasons as a catcher in the Blue Jays minor league organization. According to the source Starting pay for minor leaguers is between $1,100 and $2,150 a month, and only during the season, which can be as short as three months.

Analyzing his playing and coaching career, John Schneider's net worth is estimated at $0.5 million as of 2020.

John Schneider is a married man. He tied the knot with his girlfriend, Jess. Back in 2015, in an interview, he shared, "I proposed to my girlfriend Jess this off-season down in Tampa and dropped to the knee and the whole deal." Possibly the two tied the knot soon after their engagement.

A matter of fact, Mr. and Mrs. Schneiders are quite confidential couples in the MLB. They prefer their private life low-key, far from the media's eyes. Some reports claim that John and his wife are the parents of two children. His spouse Jess reportedly gave birth to their second son, Grayson in 2019.

A graduate of Lawrence High School, John enrolled at the University of Delaware where he played college baseball for the Fightin' Blue Hens. He was picked by the Detroit Tigers in the 24th round in the 2001 MLB Draft but did not sign, instead, he was selected by the Toronto Blue Jays in the 13th round of the 2002 draft, where he would spend the rest of his playing career. Following the 2007 minor league season, he retired due to three concussions suffered during the season.

Upon retirement, Schneider joined the Blue Jays organazation as a catching instructor. Soon, he became the manager of he Rookie-level Gulf Coast League Blue Jays in 2008. On 1st December 2010, he was promoted to manage the Short Season-A Vancouver Canadians, becoming the youngest manager in team history at 30 years of age. The following year, he managed the Canadians to a Northwest League championship and returned to the Gulf Coast League in 2013. In 2014 and 2015, he went back to managing Vancouver.

Notably, in 2016, he managed the Class-A Lansing Lugnuts and winning he first Florida State League championship in the 33-year history of the Dunedin Blue Jays in 2013.

Before the 2019 season, the Blue Jays promoted Schneider to their major league coaching staff.