John Hayden is an American professional ice hockey center. As of 2019, he plays for the New Jersey Devils of the National Hockey League (NHL). He was drafted in the 2013 NHL Draft by the Chicago Blackhawks with 74th overall pick. Furthermore, he finished his collegiate career playing for Yale University.

The twenty-four years old ice hockey center reportedly earns $0.8 million per annum as his salary and has an estimated net worth of $1 million in 2019. Regarding his relationship status, the hunk is currently dating.

Hayden is neither married nor single. Currently, he is in a relationship with his girlfriend, Lauren Johnson. The two seems to be dating for a long time. Analyzing his official social, the couple is together since 2014. 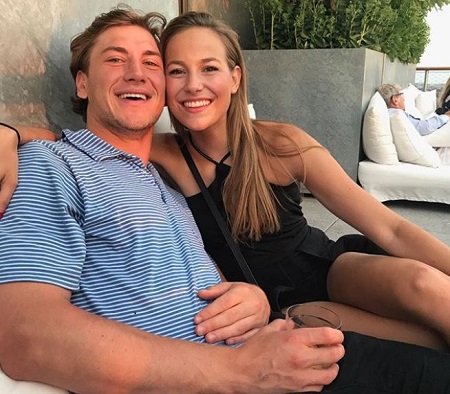 Apart, he is a massive fan of the Portuguese National Soccer team and an avid collector of Cristiano Ronaldo memorabilia.

A native of Chicago, Illinois, John Hayden was born on February 14, 1995, to Diana and Mark Hayden. His star sign is Aquarius. As per nationality, he is an American and belongs to the white ethnic background.

He lived in Denver, Colorado for eight years, prior to settling in Greenwich, Connecticut with his family. His brother, Will attended Wake Forest University, whereas his sister Catherine attended the University of North Carolina where she plays for the university's hockey team.

While attending Yale, he majored in political science, graduating in 2017. Also, he worked as an intern for the Pelican Breeze apparel company.

He played in the 2007 and 2008 Quebec International Pee-Wee Hockey Tournaments with the New Hampshire Nike Bauer minor ice hockey team. After that, he played for  Detroit Honeybaked team.

In the 2013 NHL Entry Draft, Hayden was drafted by the Chicago Blackhawks, in the third round, 74th overall pick. Before that, he played two seasons within the USA Hockey National Team Development Program in the United States Hockey League (USHL).

on March 15, 2017, Hayden embarked on his professional career in agreeing to a two-year, entry-level contract. on March 16, 2017, he made his NHL debut against the Ottawa Senators. His first NHL goal came on In his second game against the Toronto Maple Leafs on March 18, 2017.

On June 22, 2019, Hayden was traded to the New Jersey Devils in exchange for John Quenneville. His famous teammates include P. K. Subban, Wayne Simmonds, and Taylor Hall.