Joey Feek was a well-known American country music singer and songwriter. She rose to fame only in her later life. Joey is best known for several hit music in a very short span of her career. Feek and her husband were signed to Sugar Hill/Vanguard Records, which released their first three studio albums.

Joey Feek was born Joey Marie Martin on September 9, 1975, in Alexandria, Indiana. She was among the five children born to June Martin and her husband, Jack Martin. Her father played the guitar while her mother was a gospel singer. She had three sisters, Jody, Julie, Jessie, and one younger brother, Justin. Feek moved to Nashville to pursue a career as an assistant at a horse vet clinic.

Joey passed away, leaving behind the beautiful earth and her family, on March 4, 2016. She lost the fight against cervical cancer, which ultimately took her life. Rory held a private funeral on their farm in Tennessee; Joey was buried in the family cemetery on the Feek farm. She had been battling cancer for almost two years.

In May 2014, Joey was diagnosed with cervical cancer. Shortly after that, she had surgery and was declared cancer-free. After this, The singer did not take any medication and did not undergo chemotherapy as surgeons declared the surgery to be a success, with the cancer removed with clean margins. However, in June 2015, Feek felt dizzy after a year and took medication.

It was discovered that cervical cancer had returned and metastasized to her colon. Shortly after, Feek had her second surgery. The medical team was hopeful for Joey's situation, and she recovered from surgery to continue to endure an intense round of radiation and chemo. She had started to record her songs, but in October 2015, Online sources revealed that Joey had stopped her treatment process as the cancer was in the terminal stage.

Joey lived a happy and blissful married life with her husband and their children. Joey tied her wedding knot with Rory Feek in 2002. They had been dating each other for several years before their marriage. In 2014, The duo welcomed their only child, a daughter, Indiana Boone, who has Down Syndrome. 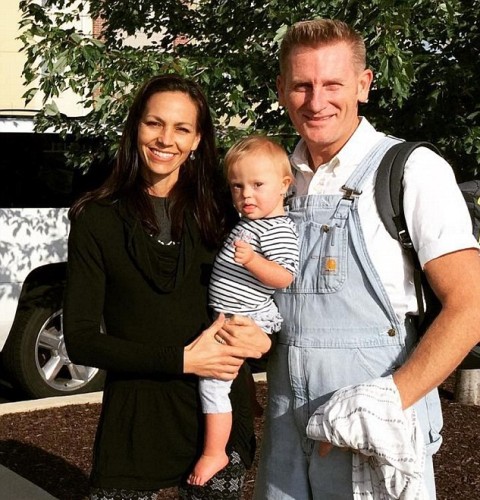 Joey along with her husband and their daughter outside SOURCE: Getty Images

Although This may be the first marriage of Feek, Her husband, Rory, was previously married and divorced from his former wife, Tamara Gilmer. They had two daughters, Heidi Fleek and Hopie Fleek.

Joey had an estimated net worth of more than $100,000 at the time of her death in 2016. She had accumulated most of her net worth working as a singer and a songwriter. Joey and Rory received a Grammy nomination for the song "If I Needed You." Their songs debuted at number 8 on the Billboard 200 when released and peaked at number 4 on the Billboard 200, 3 weeks after their release.

Farmhouse Recordings released an album, retitled If Not For You, on April 7, 2017, in her memoir of Joey.