Joseph Hayden Thomas is simply known as Joe Thomas is a retired American football offensive tackle who played his entire 11 seasons for the Cleveland Browns of the National Football League (NFL). He finished his collegiate career at the University of Wisconsin where he was recognized as the top college interior lineman. Further, he was picked by the Browns in the 2007 NFL Draft with the 3rd overall pick.

Brookfield, Wisconsin native, Joe Thomas was born on 4th December 1984, under the star sign Sagittarius. He holds an American nationality and belongs to a white ethnic background. The thirty-six years old stands 6 ft 6 in (1.98 m) tall and weighs 312 lb (142 kg).

How Much Is Joe Thomas' Net Worth?

As of 2021, his net worth is over $50 million. He owns a million-dollar real estate property in Middleton, Wisconsin (WI), US. Thomas is a partner in some franchises of Mission BBQ. Currently, he works as an analyst for the NFL Network.

Joe Thomas is married to his long-time girlfriend, Annie Thomas. The two met at the University of Wisconsin while enrolling there. The couple encountered when she came into the football training room to get her ankle taped up, and Joey-boy was there. In an interview, the couple opened: Joe's first impression of her was that she was beautiful, and her first impression of him was that he was huge.

After dating for years, the couple engaged, and after six months, they tied the knot when they were both 23. The wedding ceremony was meld in Madison, Wisconsin, and attended by around 350 guests. 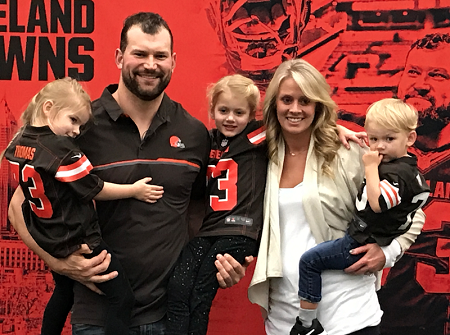 The couple shares two daughters: Logan Thomas and Camryn Thomas as well as a son. The family of five is living a blissful life.