Joe Brady celebrates his birthday on September 23. He was born Joseph Brady in 1989 in Miami Lakes, Florida. Joe is among the two children born to Joe Brady and his wife, Jodi. There is not much information about his parents in the media. He has a sister named Jacey. Jacey is a former cheerleader for Miami Dolphins. Joe graduated from Everglades High School and enrolled at The College of William & Mary, and graduated with a bachelor of science degree.

Contract and Salary; What is Brady's Net worth?

Joe Brady has an estimated net worth of more than $500,000. Joe is very much early in his career and shall be earning huge in the upcoming days. Joe is currently at a basic level. He started to work as an offensive coordinator for Carolina Panthers in 2020. Jim Chaney was the highest-earning offensive coordinator in 2020 with a $1.5 million salary. 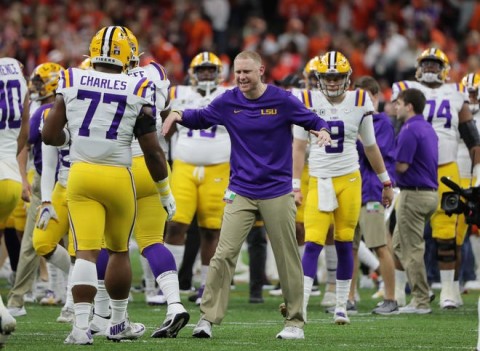 CAPTION: Joe is working as the offensive coordinator for Panther SOURCE: CBS Sports

The average salary of an offensive coordinator currently working in the United States is more than $50,000. Joe started working in 2013 as a Linebackers coach for his university. Joe signed a $1.5 million three-year agreement with LSU but left the team at the end of the first season. The deal was on track to pay him $410,000 per year in his first year, $435,000 in his second, and $460,000 in his final season.

Who is Joe Brady's Wife?

Joe likes to keep his personal life away from the public. In an interview, Brady opened about his romantic relationship with Lauren, his longtime girlfriend. The love birds have been dating each other for more than five years. 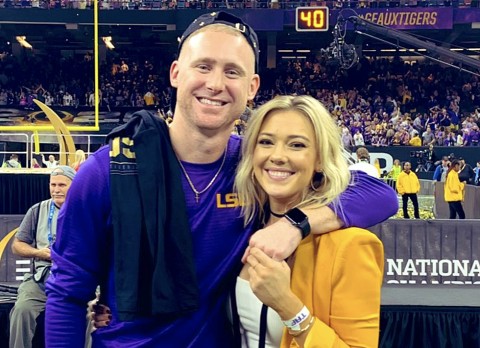 Joe and Lauren are yet to tie their wedding knot or get engaged. There is not much information about Lauren's professional career and their first meeting instance. Unlike other couples, They are not active on social media platforms. This has left a big hole among their fans.

Journey from a Player to Offensive Coordinator

Brady started playing American football from his High School. He was a wide receiver for his High School and garnered honorable mention all-state (6-A) honors as a senior. After graduating from High School, he enrolled at William & Mary Tribe, where he played as wide receiver for all four years of his University. After completing his degree, He started working as a Linebackers coach for his former team.

After working for two years as a linebackers coach, Joe enrolled at Penn State University for his Master's Degree, where he started working as a graduate assistant. The player worked there until his graduation in 2016 and got an offer to work as an offensive assistant for New Orleans Saint.