Joaquin Niemann is a rising Chilean professional golf player. He has been playing at the professional level since 2018. Joaquin plays under the PGA Tour and European Tour. Niemann ranked at no. One amateur golfer from May 2017 to April 2018. He has already won one professional event on the PGA Tour.

Joaquin Niemann was born on November 7, 1998, in Santiago, Chile. He is among the six children born to Jorge Niermann and his wife, Pamela Zenteno.  His mother played field hockey for Chile's national team. He has three brothers and two sisters. After graduating from High School, Niemann planned to attend the University of South Florida but could not gain entry due to his TOEFL score. Joaquin stands six feet and weighs 69 kg.

Joaquin Niemann has an estimated net worth of more than $5 Million. He has already earned a huge sum from his short professional golf career. Joaquin has only played in eighty-two events in his professional PGA Career. The Chilean golf player has a sponsorship deal with numerous brands like Adidas, Ping, and a few more.

In the ongoing PGA season, Niemann has already earned $2.8 Million from sixteen events. He has made cuts in all of the events and placed second in an event. Last season, Joaquin took home $2,914,136 from twenty-three events. The player won his first PGA Career and made cuts in fifteen events, his highest-earning in a single season.

Joaquin played in thirteen events in his rookie year. He earned $1.2 Million when he finished in the top ten in one event and made cuts in nine events. In the 2018/19 season, Niemann made $1.4 Million from twenty-eight events. Totaling his PGA earnings to date, it sums to $8,406,165. He is very much early in his career and shall be adding a huge sum to his net worth in the future. Joaquin has earned the most from A military Tribute at the Greenbrier, $1,597,470.

Who is Joaquin Niemann Dating? Know About His Girlfriend and Relationship Status

Joaquin Niemann is involved in romantic relationship status with his longtime girlfriend, Christina Hellema Puga. The love birds have been dating each other for more than two years. Christiana is studying architecture at the Universidad de Desarrollo in Chile. 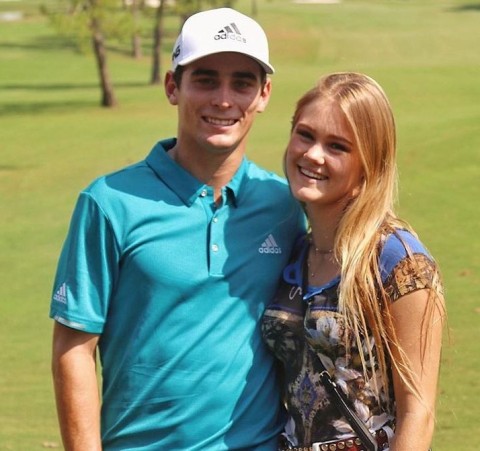 Joaquin, along with his girlfriend, Christina SOURCE: Golf Weekly.

Although, Niemann is an active social media. He has not shared his relationships in his social media profile. Christina keeps attending Niemann's games regularly and keeps traveling with him in the events.

Niemann started playing golf from a very early age. He finished his amateur career ranking at no.1 for a straight forty-four weeks. Joaquin won half a dozen of amateur titles before turning professional in 2018. Niemann made his professional debut at the Valero Texas Open. He earned a PGA Tour card for the 2018–19 season.

Joaquin won his first event at the A Military Tribute at the Greenbrier and became the first PGA Tour winner from Chile and the youngest international PGA Tour winner since 1923. He was selected into the Presidents Cup, and the U.S team won 16-14. In 2021, Niemann finished the Sony Open in Hawaii at T2 behind Kevin Na. He is ranked at No.25 in May 2021.