Brandt Jobe is a well-known American professional golf player. He has been playing at the professional level for more than three decades. Jobe currently plays in the PGA Tour Champions. He played in PGA Tour, Japan Golf Tour, and Asia Golf Tour in his early days. Brandt has won fifteen titles in his professional career.

Brandt Jobe was born Brandt William Jobe on August 1, 1965, in Oklahoma City, Oklahoma. He is among the four children born to Kay Jobe and her husband. His father was a doctor. He has two older siblings and a younger brother. After graduating from High School, Brandt enrolled at the University of California Los Angeles, where he played golf for the university team. Brandt stands five feet and eleven inches tall and weighs 82 kgs( 180 lb).

Brandt Jobe has an estimated net worth of more than $10 Million. A golf player does not need to win major events to receive the prize money. They are paid based on their score at the end of the series/events. Jobe has spent most of his career with PGA Tour and played more than 350 matches. Brandt must be making millions from his advertising and endorsement deals. 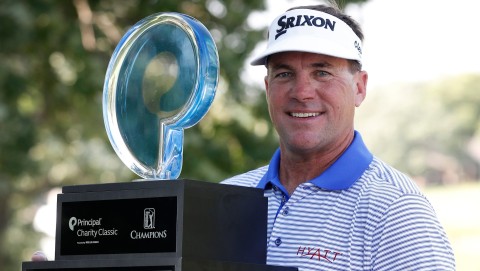 Brandt Jobe is a married man. Brandt tied his wedding knot with Jennifer Jobe in the late 1990s. Both of them have not shared a word about their wedding. The love birds had been dating each other for some time before their marriage.

Brandt and Jennifer are the proud parents of two children, daughter, Brittan, and son, Jackson. The family of four is living a happy life. It's been more than two decades of their marriage, and there have been no rumors of the couple having ups and downs in their marriage life.

Brandt started playing golf from a very early age. He played golf for the University of California Los Angeles. He turned professional in 1988 and started playing in the minor league. Jobe entered into PGA Tour in 1991, passing through Qualifying School. He won the 1995 Asia Golf Circuit Order of Merit. The player spent from 1995 until 1999 in Japan and won six tournaments. Jobe had significant hand and wrist surgery in 2003. He never won on the PGA Tour but has tied for second place four times.

Jobe reached no.30 in World Golf Ranking in 1998, which is his highest career ranking. In 2017, Jobe won his first PGA Tour Champions Title at Principal Charity Classic. In 2019, he won his second PGA Tour title by three-stroke against Tom Pernice Jr.