Jesus Navas Gonzalez aka Jesus Navas is a Spanish Professional Association footballer who is playing currently for Sevilla FC and the Spanish national team as a right-winger or right-back. He was with Sevilla from 2003 to 2013 before joining ManchesterCity. Jesus played the majority of his career games Sivilla FC appearing in 572 games in total to date.

The Los Palacios born defender, Navas is a product of Sevilla Academy. He joined the Sevilla youth team at the age of 15 years in 2003-4 season making his debut game on 23 November 2003. He played his whole youth career for just Los Palacios and Sevilla. Navas is brilliant with it comes to speed, dribbling, and the ability to chase the defenders. These qualities led him to be permanently promoted to the main squad in  2004.

During his tenure at Sevilla FC from 2003 to 2017, he played in 285 games adding 23 goals to his tally. The Spanish international won various Cups and leagues which includes Supercopa de Espana 2007, UEFA Super Cup 2006, and many more as Sevilla FC players. Navas's 2010-11 seasons were greatly hampered by his injury as a result he appeared in less than half the Seville match. On 4 June 2013 after so much speculation, he was confirmed to join the Premier League side for Manchester City FC. His Machester day was going fine. He played 123 games in total scoring just four goals in his four-year contract. The Manchester City FC coach, Pep Guardiola is the one to transfigured him into a right-back position.

On May 25, 2017, Manchester City announced about Jesus leaving the Club.  The Spanish jersey number 16 again moved back to his former club Sevilla FC on 1 August 2017 signing a four-year contract. Navas is the first-ever Sevillian player in reaching 500 games for Sevilla FC. Furthermore, he extended his contract for 3 more years for Sevilla FC.

Jesus Navas Gonzalez Famously known as Jesus Navas made his Spanish debut for the Spain U-21 on 17 August  2004. He had been remarked as a vital player for both country and his club. He has given a huge contribution to his nation in winning the 2010 World Cup, Euro Cup 2012 leading 42 games under his captaincy adding five goals to his tally.

The Spanish International, Navas stands tall at the height of 5 feet 7 inches and weighs over 69kg. He has a shredded and tight muscles body structure.

The former Spanish captain, Navas has been in this football line for more than 2 two decades. He has been playing for various top clubs earning decent salaries thus, he must have added good fortunes to his net worth to date.

Navas is currently signed to Sevilla since 2017 and recently extended his contract with the club for the next three seasons until 2023-2024. He earns €300,000 in a week with an annual salary of €3.6 Million. As per the sources, his estimated net worth is around $10 Million. He is among the highest-paid players in Spain with an annual salary of 3.6 Million Euros. Moreover, he also has other means of income generation i.e from his sponsors, endorsement, and brands.

NB Football is one of his sponsors that he promotes on his Instagram. NB Football pays a decent amount to him but that actual financial detail is still under the radar.

Who is Jesus Navas' wife?

Jesus Navas is married to his long-term girlfriend Aljendra Navas. Before throwing married knot, the couple dated for quite a long time. They get married on June 10, 2011, in their home country where all the top players, celebrities were there in attendance. 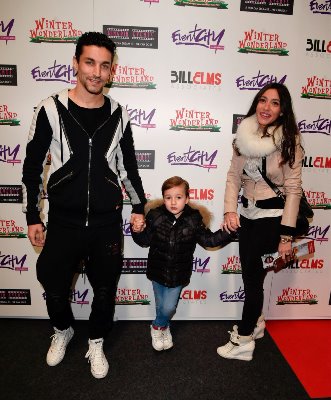 Jesus with his wife Alejandra and son SOURCE: Instagram

The Navas family is blessed with a baby boy named Jesus junior. Their child Jesus was born in 2012 just a year after their marriage. They have managed their private and professional life balance.

The Sevilla Fc right-back is a role model for many people. He gives out his information and happenings through his Instagram id @jnavas16 which has followers of more than 379K.