Jenson Button is a well-known British racing driver. He has been driving in professional events for more than two decades. Button won the 2009 Formula One World Championship when he drove for the Brawn GP team. Jenson won the 2018 Super GT Series along with Naoki Yamamoto.

Jenson Button was born Jenson Alexander Lyons Button on January 19, 1989, in Frome, Somerset. He is among the four children born to John Button and his wife, Simone Lyons. His father was an English rallycross driver. Jenson holds South-African and English heritage. Button stands six feet and weighs 75 kg. Jenson along with his titles from the F1 racing SOURCE: F1

Jenson makes a huge amount from his sponsorship and advertising deals. He is currently working as the brand ambassador for shampoo company Head & Shoulders and has partnered with other businesses over the years, such as Hilton, Hugo Boss, and Tag Heuer. In between 2012 June and 2013, Button was ranked as one of the world’s top-earning motorsports drivers by Forbes. Also, Jenson owns several luxurious cars and a 72-foot yacht.

Who is Jenson Button Dating? Know about His Girlfriend and Relationship Status

Jenson is very much open about his relationship status. Button is engaged to his longtime girlfriend, Brittny Ward. The love birds got engaged in August and have been living a happy life. The duo is the proud parents of two children, a son, Hendrix and a daughter, Lenny Monrow. Jenson keeps sharing photos of his fiance and his children in his social media timeline. 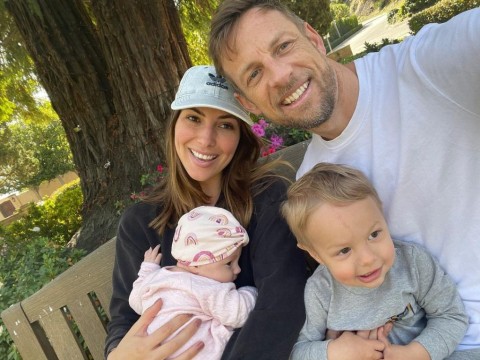 Jenson shares a photo with his wife and children SOURCE: [email protected]

Jenson is famous for his successful career and his love life. He was first engaged to Louise Griffiths for more than five years. They officially separated in 2005. Button remained single for some time and then found love with Jessica Michibata. They exchanged their wedding vows in 2014, but they separated in 2015.

Jenson started karting at a very early age of eight. He joined the F1 team for the 2000 season. The racer became the youngest driver and the first Briton to claim the European Super A Championship winning the 1997 Japanese World Cup. Button earned his first title in the 2006 Hungarian Grand Prix.

In 2009, Jenson won the Formula One World Championship driving for the Brawn GP team. He won his last Grand Prix at the 2012 Brazilian Grand Prix. Button started in 306 games in the Formula One World Championship and appeared in seventeen games in the SUper FT FT500 Championship. Jenson announced his retirement from F1 at the end of the 2016 season but returned to work for the team in 2017 and joined Williams as their senior advisor.