Jenny Potter is a well-known American Ice hockey player. She is currently a member of the United States Women's national ice hockey team. Potter has won gold medals in the 1998 Olympic Games, four gold medals at the World Championships and a gold medal at the 2011 Nations Cup.

Jenny Potter was born Jennifer Lynn Schmidgall on January 12, 1979, in Saint Paul, Minnesota. She has successfully kept her personal life away from the media. After completing High School, Potter enrolled at the University of Minnesota-Duluth graduated in 1997. Talking about her physical appearance, Potter stands five feet and four inches tall and weighs 66 kg.

Jenny Potter has an estimated net worth of more than $5 Million. She credits most of her net worth to her successful career in ice hockey. Potter played in her professional career for almost fifteen years and worked as a coach. The player could not play in the league matches as the leagues were formed in her late-career and did not list her name. 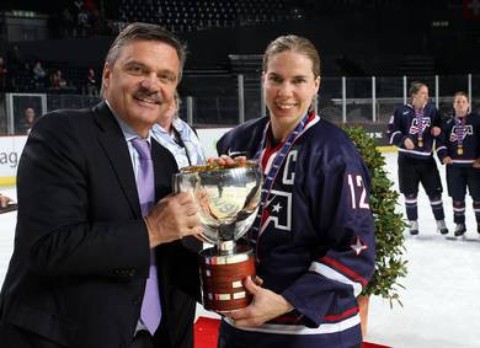 Jenny receives her award after a Game SOURCE: US Hockey

The average salary of an NHL player is more than $2 Million. Potter works as a coach for numerous universities and the United States Hockey team. She is living a lavish-lifestlye through her successful career.

Yes, You read that right. Potter is a proud mother of children. Jenny walked down her wedding aisle along with Rob Potter in 2001. The love birds had been dating each other for several years before walking down their wedding aisle. They have not shared about their first meeting experience in public. The player is publicly about her relationship and regularly shares her family photos in her timelines. 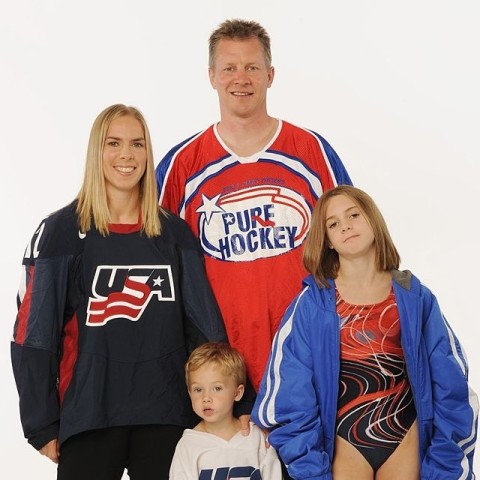 Jenny shares a photo with her family SOURCE: Getty Images

The family of four is living a happy married life. Although, It's been two decades since their marriage, They have had no rumor of the couple having ups and downs in their married life. The couple runs a summer training camp called "Potter’s Pure Hockey."

A career in American Ice Hockey and Coaching

Jenny started playing ice hockey and represented the University of Minnesota Duluth in her early days. She set an NCAA record (since tied) for most goals in one game with 6. The player is the all-time leading scorer in Bulldogs history and was named the WCHA All-Decade team in 2009. Potter has been part of the United States National Ice Hockey team since 1997.

Jenny earned her first gold medal at the 1998 Olympic Games held in Nagano. In 2002, Her team won the silver medal at the Olympics and was not from the team for the 2006 Olympics Game. Potter became the most decorated Olympic medalist in Minnesota-Duluth Bulldogs hockey history. Jenny has won ten team medals, including four gold and six silver medals at the World Championships.

In 2013, Jenny started working as the head coach for the women's hockey team at Trinity College and retained that position for two seasons. In 2015, She was named for the Ohio State Buckeyes Women's Mickey hockey program head coach but was released in 2016. In 2020, Potter was inducted into the U.S. Hockey Hall of Fame Class of 2020.