Jennifer King is the first Black woman in NFL history to be a full-time coach. She is currently a full-time assistant running backs coach for the Washington Commanders of the National Football League (NFL). Early in her career, she worked for Dartmouth College, Johnson & Wales University, Greensboro College, and the Arizona Hotshots Football Team of Alliance of American Football.

Rockingham County native, Jennifer King was born on 6th August 1984, under the star sign Leo. She is the daughter of Ernest and Janice King. The thirty-seven years old holds an American nationality and is of Afro-American ethnic background. She stands 5 feet 8 inches tall.

How Much Is Jennifer King's Net Worth In 2022? Salary

Recently signed as the full-time offensive assistant, Jennifer King's contract's financial detail such as salary and bonuses are yet to disclose. Like with any profession, there are various factors that go into determining an offensive coordinator’s salary. One of the biggest factors is experience, while which team he/she coaches also plays a role in how much he/she makes. According to the source, on average, an NFL offensive assistant will be in the $0.4 million range in terms of salary.

With the date, Jennifer King is expected to earn the average i.e, $0.4 million per annum, if not her salary will be no less than the six-digit figure. As of 2022, her net worth is approximately $0.5 million.

It's still unknown if the Redskins' offensive coordinate is married, in a relationship, or still single. Jennifer King is a quite confidential person when it comes to her love life. To date, there is no buzz in the media regarding her being romantically involved with anyone.

Additionally, her IG where she has thousands of followers is full of football photos rather than lovey-dobby. As there is no confirmed info about her love life, she is believed to be single.

Initially Jennifer King stepped into coaching in 2006 serving as an assistant women's basketball coach at Greensboro College. There, she also was Pride TV Play-byPlay and Color Commentator (2009-2016). In July 2016, Johnson & Wales University hired King as their new head women's basketball coach. She leads the team plus an 8-win total and the highest win total in school history in the first season. What's more? she won the USCAA Division II National Coach of the Year and the USCAA Division II National Championship (2017-2018). 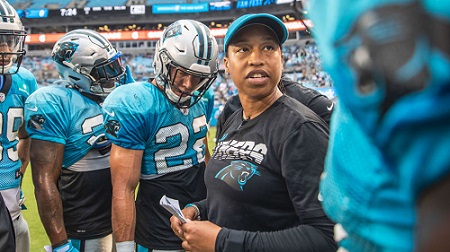 King joined Arizona Hotshots Football team as an assistant wide receiver coach (December 2018 - April 2019). From September 2019 to February 2020, she was an offensive assistant at Dartmouth College.

After spending 2020 as a coach under Ron Rivera, the Washington Football team promoted Jennifer King to full-time offensive assistant in January 2021.

In 2021, she was appointed the commander of the Washington Football Team.

Jennifer King enrolled at Rockingham County High School where she played for four years for head coach Woody Wall, helping the team to the 2001 state championship game. Also, she was a standout in volleyball and track. Further, she attended Guilford College where she excelled in basketball and softball. Further, she earned her Masters of Science (M.S.), in Sports Administration at Liberty University.