Jenna Bandy is a rising American Social Media personality and an Instagram celebrity. Bandy rose to fame after posting videos of her basketball skills on her social media accounts. Jenna also holds numerous Guinness World Record to her name.

Jenna Bandy was born on September 29, 1992, in California, United States. She is among the four children born to John Bandy and his wife, Sheryl Bandy. Jenna has two older siblings, Gia and Jetta and a twin brother Jace. Her brother Jett was a starting catcher for the University of Arizona baseball team. After graduating from Thousand Oaks High School, Bandy enrolled in California State Univesity Monterey Bay and graduated in human communications. Regarding her physical appearance, Jenna stands five feet and eight inches tall and weighs 65 kg.

Jenna Bandy's Net Worth and Earnings

Jenna Bandy has an estimated net worth of more than $100,000. She credits most of her net worth to her successful career as a social media figure and a basketball coach. The salary of a college assistant coach ranges from $40,000 to $70,000. Bandy is among the top-ranked assistant coaches and must be making a huge amount. 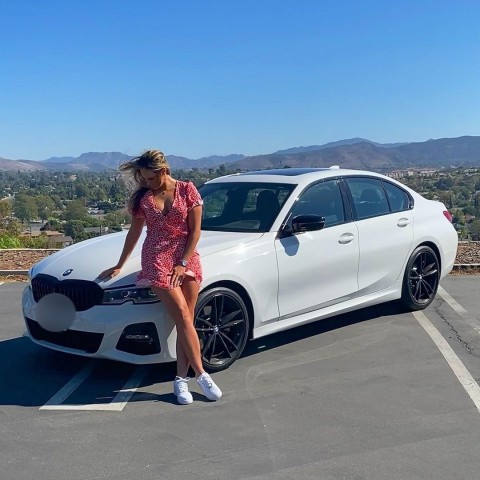 Jenna shares a photo with her BNW car in her timeline SOURCE: [email protected]

Jenna has a follower closing to half a million with a verified Instagram account and makes a good amount for her posts in the account. Also, Bandy has a Youtube account with more than 220k subscribers and keeps posting videos. She is very early in her career and will be making millions in the future.

Who is Jenna Bandy Dating? Know About Her Boyfriend and Relationship Status

Jenna is an active social media user and is open about her relationship status. Following her timeline, we can confirm that that famous social media personality is single in late 2021. Bandy has had some heartbreaks in the past and is trying to focus on her career. She is very close to her family and friends and spends her free time with them.

Jenna dated Caleb Nash Feemster for some time back in the day. They both had a similar background of not getting into the NBA and WNBA after an injury. Although They are not dating each other, They are very close to each other.

Journey From Basketball to Social Media

Jenna started playing basketball in High School. She was a varsity starter all four seasons at Thousand Oaks High School. Bandy averaged 12.0 points, 7.1 rebounds, 2.8 assists and 2.4 steals per game her junior season. In her final year, Jenna was named two–time All-County and All-Conference first-team selection and selected team MVP and Best Offensive Player. She enrolled at the California State University of Monterey Bay and played twenty-three games in her freshman year.

Jenna had a knee injury that left her out for most of the season and had a bounce-back for her senior year in her junior year. She did not list her name for the WNBA draft instated started working as an assistant coach at her High School and then at Moorpark College as a junior college assistant coach. In the meantime, The coach started sharing videos of her training and skills and has earned fame through it.