Jeff Driskel is an American professional NFL player who plays in the National Football Association (NFL). As of 2019, Jeff Driskel currently plays for the Cincinnati Bengals as their quarterback. Jeff Driskel has played for other teams like San Francisco 49ers.

As of 2019, Jeff Driskel reportedly earns around $613,135 as his yearly salary from Cincinnati Bengals. Further, Jeff Driskel has an estimated net worth of over $1 million.

Jeff Driskel was born on April 23, 1993, in Oviedo, Florida to parents Jerry Driskel and Mary Driskel. As per his nationality, he is American and belongs to the White ethnic group.

Jeff Driskel joined the Paul J. Hagerty High School in Oviedo, Florida where he played for his high school football team. After completing high school, he attended the University of Florida but was later transferred to the Louisiana Tech University.

As of 2019, Jeff Driskel has an estimated net worth of over $1 million similar to that of Kyle Lauletta. He reportedly signed a four-year contract worth $2,452,539 with San Francisco 49ers in 2016. Furthermore, the NFL player has an average salary of $613,135 annually.

Jeff Driskel so far has made earnings of $2,275,539 from his entire NFL career. Further, the NFL Player Jeff Driskel earns a good amount of money from various sponsorships.

Jeff Driskel is married to his girlfriend Tarin Moses since2016 after being in a relationship for a long time. The couple is blessed with a beautiful daughter named Jensen Michelle Driskel born in 2018.

Jeff's wife Tarin is a former cheerleader as well. Further details about Tarin is not available on media.

The couple is living a happy married life since there are no rumors or controversies regarding their divorce or separation.

The Famous NFL star is 6 feet 4 inch in height and weighs around 106 kg lbs. Jeff Driskel is not only a world-class athlete but also has a very attractive individual.

Other than being a famous NFL star, Jeff is an active user of social media and has a large number of fan following.

Jeff began his professional playing career with the San Francisco 49ers after being drafted in the 2016 NFL draft and signed a 4-year $2.45 million contract. Jeff got a chance to compete with Christian Ponder since Thad Lewis got injured. 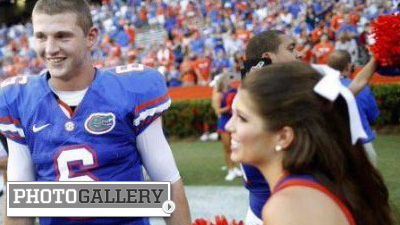 Later Driskel was waived by San Francisco and claimed by Cincinnati on 2016 September 4th and started his career alongside other two quarterbacks Andy Dalton and AJ McCarron.

Currently, he is playing for the Cincinnati Bengals as their quarterback.