NBA Player Turned Coach, Jarron Collins currently serves as the assistant coach for the Golden State Warriors of the National Basketball Association (NBA), a position he held since 2014. He spent a decade in NBA as a player playing for the various franchises after being picked in the 2001 NBA Draft.

Hails from Northridge, California, Jarron Collins was born on 2nd December 1978, under the star sign Sagittarius. He holds an American nationality and is of Afro-American ethnic background. He has a twin brother, Jason Collins, also a former professional basketball player who played 13 seasons in the Center.

Aforementioned, Jarron Collins spent a decade in NBA playing mostly for the Utah Jazz as the center. His NBA playing career earning is given below the table.

As of 2021, his net worth is approximately $5 million. Further, he owns a million-dollar house in Los Angeles, California.

Jarron Collins is married to an activist who is co-founder of The Ideareur, Elsa Collins. His wifey is from Tijuana, Mexico. She received her bachelor’s and master’s degrees from Stanford University, where she met Jarron Collins. later, she had her J.D. from Columbia Law School. 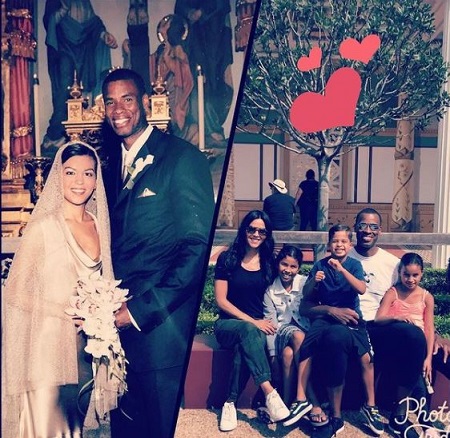 Jarron and Tijuana tied the knot in 2004 and now share three children together:  Alessandra, Valentina, and Massimo.

Jarron started his basketball career along with his twin brother Jason. Both graduated from Harvard-Westlake School in Los Angeles, California, where Collins averaged 13.8 points and 9.2 rebounds during his senior year. Collins played his college basketball at  Stanford University, where he was a two-time All-American and finishing his Stanford career in the top ten all-time.

At the 2001 NBA draft, Collins was picked by the  Utah Jazz in the second round where he played eight seasons until becoming a free agent following the 2009 season. Then he had a brief stint with Phoenix Sun (2009-2010), Los Angeles Clippers (2011), and Portland Trail Blazers (2011). After the 2011 season, he retired from basketball.

In 2014, he was hired by the Golden State Warriors as an assistant coach.