Jarren Duran was born Jarren William Duran on September 5, 1996, in Corona, California. He is the son of Octavio Duran and his wife, Dena Duran. Much about his parents and his early life is under the radar. Jarren graduated from Cypress High School and enrolled at the California State University, Long Beach. Talking about his physical appearance, Duran stands six feet and two inches tall and weighs 91 kg.

Jarren Duran has an estimated net worth of more than $1 Million. He has just started his professional career in 2021. Duran is ranked among the top prospect for the upcoming days. Jarren will be adding millions to his net worth in the coming days. Jarren has an annual salary of $570,500 with the Sox. 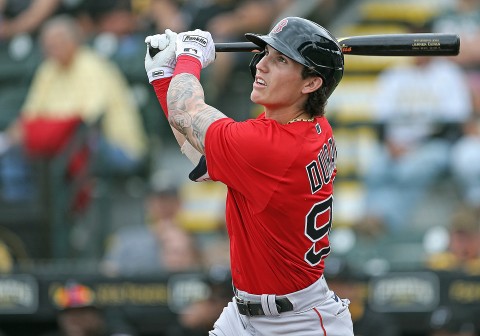 Jarren has not shared a word about his contract with his club. Mike Trout is the highest-paid baseball outfielder in 2021, with an annual salary of more than $37 Million. The reported average salary of an MLB player is more than $4.3 Million.

Who is Jarren Duran Dating? Know About His Girlfriend and Relationship Status

Kylie posted a photo of the couple hugging each other after Jarren signed with the Sox. Nothing much about their first meeting experience is shared. Granno is also an athlete and plays soccer for St. Marys University.

Journey to the MLB

Jarren started playing baseball from his middle school and was part of the High School baseball team. He got multiple offers from the universities but chose to play for California State University, Long Beach. Duran redshirted in the first season and played for the remaining three seasons. In 2017, Jarren played in the Cape Cod Baseball League for the Wareham Gateman.

In 2018, Duran listed his name for the 2018 Major League Baseball draft. Boston Red Sox drafted him in the seventh round. In his first season, He spent his time playing with the Lowell Spinners and Greenville Drive. The following season, Jarren started the 2019 season with the Class A Advanced Salem Red Sox. At the end of the season, He was named into the 2019 All-Star Futures Game and the Red Sox' minor league baserunner of the year.

In 2020, Jarren started training with the Red Sox senior team and MVP in the Puerto Rican Winter League. He made his MLB debut in July 2021, starting in center field against the New York Yankees.