Janik Haberer is a popular professional football player from Germany. He plays as a midfielder for Bundesliga club SC Freiburg. He represented Germany for the first time in 2012 at the U-19 level. He has played for several clubs, including SPVgg Unterhaching, 1899 Hoffenheim, SC Freiburg, etc. The German international also won the UEFA U-21 Championship 2017.

Janik Haberer, the SC Freiburg midfielder, birth date is 2 April 1994, and his birthplace is Wangen im Allgau, Germany. As per astrology, his zodiac sign is Aries, and his age is 28 years old as of 2022. Haberer has a height of 6 feet 1 inches and weighs 78 kg. Further details, he has blonde hair and brown colored eyes. His family background and other detail it's still under the radar.

When he was about five years old, his parents introduced him to playing football. He trained and played his youth days a FC Wagen initially and then to FV Ravenburs, Fc Memmingen and SpVgg Unterhaching from 1999 to 2012. He began playing professionally from SpVgg Untehacnhing II, and shortly after, Habrerer got upgraded to the senior squad of Unterhaching. He played for two years of his career for the club. After that, he moved to 1899 Hoffenheim marking a contract pact for the two-season. At the center of his term, the club assured to loan him to Vfl Bochum. After completing his loan period, he signed a  major six contract with SC Freiburg in 2016. He would most likely join FC union Berlion for 2022-23 remainder of the season.

He made the nation's debut in a 2012 competition at the U19 level when talking about his international career. Since then, he has been representing Germany in numerous tournaments and cups. Regardless, he is yet to make his senior debut for Germany.

Who is Janik Habrerer GF? Is he married?

The German descent Freiburg star player Haberer is yet to get wedded. However, he is in a relationship with the girl whom he often post on his Instagram.

The pair have dated since 2016. The details about his Gf has still confidential. He chose to keep it hidden. He has posted their beautiful photos together, writing, "#Valentinsday." They appear to love each other deeply, so they are the potential to get married shortly.

Janik Haberer's salary and net worth

It's been more than a decade since Janik Haberer, the SB Breiburrg midfielder, has played for top German top clubs. Thus, we can imagine how much finances he has gained from his soccer career.

As per the report, his estimated net worth of $6 Million. When he started his Bundesliga career as an Unterhanching player, he acquired €2,03,000 yearly. 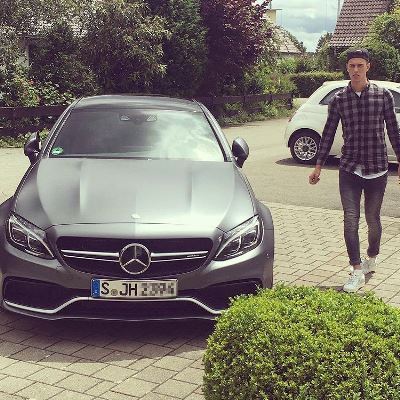 Puma also endroses Haberer. He promotes and brands the Puma products on his Social sites. He also earns a handsome amount of money from it and thus hasn't been made transparent about it.

He is a regular media user. He is active more on Instagram than on other sites. Haberer's Instagram id is @janikhaberer, and he has followers of more than 21k. The German international shares his personal life and sport-related info and facts via his social sites.