James Tarkowski is a rising English professional football player. He is currently playing in the English Premier League for the Burnley F.C. James is also part of the England National team. James plays as a center back for his club and country and wears a No.5 jersey.

James Tarkowski was born James Alan Tarkowski on November 19, 1992, in Manchester, England. He is the son of John Tarkowski and his wife. James has successfully kept his personal life away from the public. James comes of polish descent and holds British nationality. His grandfather left Poland after world war. Tarkowski graduated from Failsworth High School. Talking about his physical appearance, James stands six feet and one inch tall and weighs 81 kg.

James Tarkowski has an estimated net worth of more than $10 Million. He has accumulated most of his net worth through his successful career as a football player. The player is very much early in his career and will be making millions in the future. As per sources, James has an annual salary of £2,600,000 with his club, Burnley. Last season, Tarkowski refused to sign for Leicester City for a whooping  £30m-plus move. James celebrates with his teammate after scoring a goal SOURCE: TSN

In 2016, James signed a three-and-a-half-year contract with Championship club Burnley for an undisclosed fee. In 2018, The player signed a four-year / £10,400,000 contract with the Burnley F.C., including an annual average salary of £2,600,000. After completing this season, James will be moving to a new club valued at more than £30 Million in fees.

Who is James Tarkowski Dating? Know About His Girlfriend and Relationship Status

James is an active social media user. His timeline is filled with photos of his games, training, and girlfriend. He has not shared a word about his girlfriend. James is involved in a romantic relationship with his longtime girlfriend, Samantha Johnstone. The love birds have been together for more than four years. Tarkowski shared their first photo back in 2017. 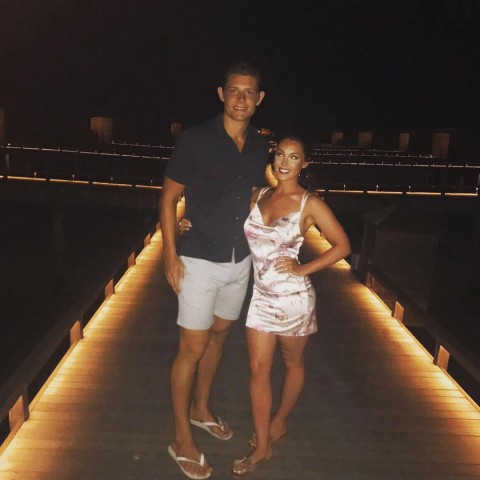 James shares a photo with his girlfriend at a vacation SOURCE: [email protected]

In a photo posted by Samantha, we can see a child, but none of them have shared about the baby. It could be of the couple or cousins. Both of them seem to be very much supportive of each other.

James started training with the Blackburn Rovers and joined Oldham Athletic in 2009. He made his senior team debut in 2011 with the Oldham Athletic in the third-tier league. Tarkowski got his breakthrough in the 2012-13 season. The player remained with the team until 2014 and appeared in seventy-two games for the team. In early 2014, Brentford signed him on a three-and-a-half-year contract for an undisclosed fee.

James played in seventy games for the club in the next three seasons and then moved to Burnley. The club got promoted to the Premier League and was among the top players for the club. Since 2016, He is part of the team in 166 games and has scored seven goals. Tarkowski renewed his contract in 2018 with the club and is set to expire in 2022. Also, James was named for the 2018 World Cup team but withdrew from the standby list later for a hernia operation.