Ivan Toney is a Jamaican-English football player by profession who currently plays for the English club Brentford as a striker. He was one of the major players, if not the best player to help Brentford play in the Premier League after a long wait of 74 years.

In the 2020/21 season, Toney scored 31 goals for Brentford in EFL Championship. It made him the highest goal scorer in a single season. He went on winning the EFL Championship Golden Boot and Brentford's Supporters Player of the Year and of course promotion to Premier League. The 2020/21 EFL Championship Golden Boot winner is having his best days at Brentford. Before, he played for several clubs including Newcastle, Peterborough, and loans to other clubs. Let's explore all the information of the Jamaican origin player and how he went on to play in the top league of the world.

Who is Ivan Toney? (Family and Early Life)

Ivan Benjamin Elijah Toney, famously known as Ivan Toney was born on 16 March 1996 in Northampton, England. He is originally from Jamaica but holds the citizenship of England and currently represents England. His birth sign is Pisces and a devoted Christian who always prays before the game.

The Brentford striker has his family roots in Jamaica. He was raised by his single mother, Lisa. he has 2 sisters Jenna and Jasmine, and the other two half brothers from different fathers.

He always had to felt the absence of his father and he once told that his mother had to skip the meal just to get her children fed. And he is always grateful to his mother for that.

How much is Ivan Toney's Net worth?

Ivan Toney has an estimated net worth of 5 million at just 25 years of age. His major sources of income is playing football for different clubs throughout his career. According to transfermarkt, Toney's market value is €28.0 million. He joined Brentford from Peterborough for €5.60 million and since then his value in the market has raised substantially. He earns £21,000 per week in Brentford.

He lives a modest lifestyle with his family in England.

Relationship with Katie and Father of a son

The footballer has been in at least one previous relationship before he met his current girlfriend wife Katie Toney. There are no sources claiming their marriage but the pair have been living together for more than 3 years.

The couple is also proud parents of a son named Ivan Toney Jr. He was born on 17 August 2019 in England. 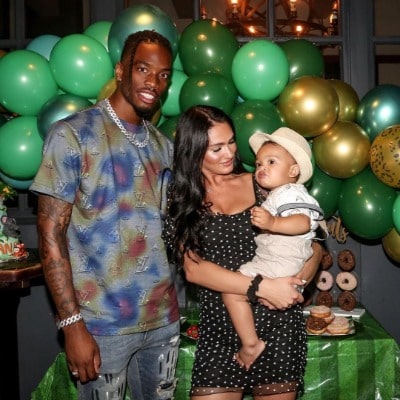 Ivan Toney's Tattoos and their meanings

Ivan has lots of tattoos all around his body.  The first one is in the middle of the chest and stomach as "17" and football under it. It represents his jersey number. On the right side of his stomach, he got a tattoo of his grandparents and his son. His grandparents already died and were very close with him before their death.

On the left side of his stomach, he got a tattoo of a cat in a pool with a reflection of the tiger. He once said that it represents himself when he looks at the mirror and no others opinion matters to him.

Besides, he also has a tattoo of birds on his chest, a joker in his arms, and others too.

Toney has a height of 6 feet 1 inch (1.85 m) and currently weighs around 65 kg. His physical appearance is one of the keys to making him more flexible around the opponent's box.