Isaac Seumalo is a well-known American football player. He is currently playing in the National Football league for the Philadelphia Eagles. Isaac plays as a Guard for the club. Seumalo turned professional in 2016 after The Eagles drafted him in the third round.

Isaac Seumalo was born on October 29, 1993, in Honolulu, Hawaii. He is among the five children born to Joe Seumalo and Karen Seumalo. His father is the defensive Line coach at the San Jose State University. Seumalo's sister Jessi works as the director of on-campus recruiting for the Washington State football team. Seumalo graduated from Corvallis High School and enrolled at Oregon State University. Talking about his physical appearance, Isaac stands six feet and four inches tall and weighs 137 kg.

Isaac Seumalo has an estimated net worth of more than $10 MIllion. He has earned most of his net worth through his football career. Isaac receives an annual salary of $5,650,000 for the 2022 season while playing with the Eagles. The player signed a three-year contract worth $15,918,000 in 2019. As per the contract, Isaac would receive $7.6 Million as the guaranteed amount. 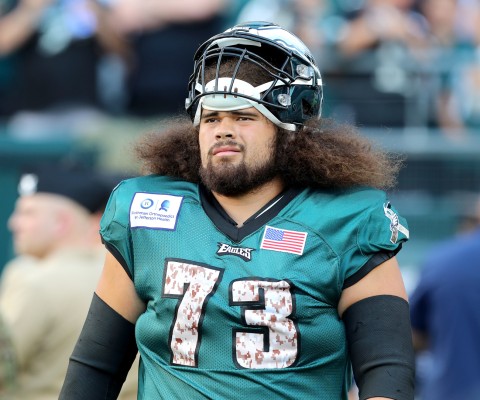 Isaac plays in the NFL for the Eagles SOURCE: Oregon Live

Who is Isaac Seumalo Dating? Know About His Girlfriend and Relationship Status

Isaac is very private about his relationship status. The football player does not show any presence on social media. He could be single, dating or even married to his wife and living a happy married life. Seumalo has successfully kept his personal life away from the spotlight.

Career in the NFL and Stats

Isaac started playing American football in High School. As a junior and senior, he was a 5A First Team All-State as an offensive and defensive lineman. After completing HIgh School, The player enrolled at Oregon State University and was named into the football team. He was named the Freshman All-American team and made it into the Hawaii Bowl Champion.

After graduating from the University, in 2016, Isaac listed his name for the 2016 NFL draft. Philadelphia Eagles drafted him in the third round, overall seventy-ninth pick. Isaac appeared in fourteen games in his first season with the club and was part of the Super Bowl-winning team in Super Bowl LII. The player had signed a two-year contract with the club and extended his contract until 2022 in 2019.

In the 2020 season, Isaac was placed on an injured reserve with a knee injury but was soon activated. In late 2021, The player had a Lisfranc injury and rested for the season.