Is the 24-year-old Real Madrid and Croatia National Team Midfielder Mateo Kovacic Married? Details of His Affairs and Dating Rumors

Mateo Kovacic is a Croatian professional footballer who plays as a deep-lying playmaker and as an attacking and central midfielder for Spanish club Real Madrid and the Croatian national team. Stepping towards the dreams, he appeared in the 2018 FIFA World Cup in Russia where he provided a beautiful and unselfish assist to his teammate, Ivan Rakitic against Argentina which gave them the 3-0 victory.

The Croatian football star, Mateo is married to his beautiful girlfriend, Izabel Andrijanic who later turned into his wife. The couple is not yet blessed with any child. Let's go deeper into Kovacic life and find out the secrets about his girlfriend, wedding ceremony, wife, affairs, and dating.

Stay tuned with us to collect the detailed information.

The football star, Mateo is a married man. He is married to his beautiful girlfriend, Izabel Andrijanic. Izabel belongs to the Swiss roots.

Well, the couple first met at the church in Croatia just like his Real Madrid teammate and goalkeeper Keylor Navas and his wife. They both are religious and were in the church where Izabel was a singer and Kovacic was an altar boy.

My past, my present, my future! #myeverything

The couple dated for aDuring four-years of relationship, the couple captured a lot of pictures and shared a lot of memories together.

Kovacic and Izabel finally decided to tie the wedding knot on 17 June 2017 in the Croatian village of Sesvetki, where the couple first met and fell in love with each other. They exchanged their vows at St Antunas Church and celebrated at the Westin Hotel in the Croatian capital city of Zagreb.

Izabel is an Economics student at the University of Zagreb aside she is trying to be a model.

Before, in an interview, Kovacic admitted he is truly in love with his girlfriend, Izabel saying;

"I like her honesty, her simplicity, and her decency. Of course, she is physically attractive, but that's not the most important for me. What matters is that she is a good person, kind and polite."

Besides, the couple shares a  lot of pictures and posts on their Instagram profile. The couple is not yet blessed with any children as they are still sharing a good time together.

Kovacic seems to be a very loving husband and he will be a caring dad too after becoming the parents. Well, there is even not yet any conflicts between the couple which can lead them to the separation or divorce. 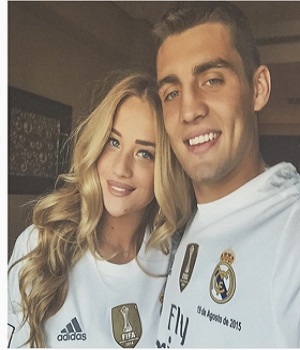 Besides, there is no information regarding Kovacic's past affairs and relations. Kovacic seems to be a very clean person who spends much of his time with his family and profession.