Ikem Ekwonu is an American football offensive tackle who played college football for the NC State Wolfpack. Following the junior season, Ekwonu announced that he would forgo his remaining college eligibility to enter the 2022 NFL Draft, earning Jacobs Blocking Award (2021) and First-team All-ACC (2021).

Charlotte, North Carolina native, Ikem Ekwonu holds an American nationality and is of Afro-American ethnic background. He stands 6 ft 4 in (1.93 m) tall and weighs 320 lb (145 kg). His birthday is on November 1. His star sign is Scorpio.

Ikem Ekwonu is the son of T.J. Ekwomu, a 6’6 doctor who played college basketball before coming to the United States from Nigeria. Similarly, mother Amaka Ekwomu. T.J was a high school track star.

Talking about his brother Osita Ekwonu( twin brother)  and he is more like his big brother. And he is also an athlete and plays for linebackers at Notre Dame State University. As a result, being in an athlete family he also gets more support and ideas from his parents and ultimately, it helps him to do better in his career.

Ekwonu started his career as a freshman from NC State Wolfpack as a left tackle. He is very much big and powerful which makes him highlighted among other players which helps him National Football League(NFL). 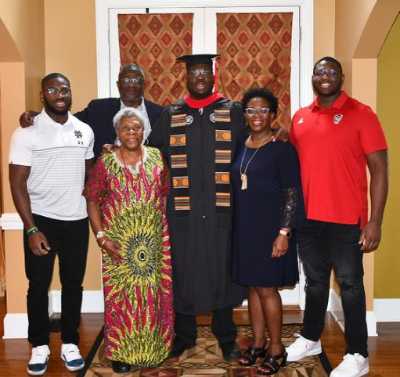 On the other hand, he is allowed to play as a left tackle and again he gives his best gameplay and scores 22 knockdowns and 50 pancake blocks. He was given All-Atlantic Coast Conference (ACC) at both tackle and guard by the Associated Press.

EKwonu is a very versatile and dynamic player he can play both as a left tackle and left guard and he has very powerful hands which support him to strike opponent team players.

Moreover, the best part about Ekwonu’s game is his power at the point of attack, which is maximized through his mauler’s mentality. Ekwonu has overwhelmed opponents from the college level and he is massive at his gameplay.

Ikem Ekwonu has announced for the 2022 NFL Draft.  He is listed as the No. 17 overall prospect for the 2022 draft and the top guard. Last season, the No.17 pick (Alex Leatherwood) signed a contract worth about $14.392 million, including a signing bonus of around $7.827 million.

If Ikem goes draft as per the projection, he will be a multi-millionaire very soon. For now, his net worth is under review.