Iga Swiatek is a Polish professional tennis player who is ranked #1st by the Women's Tennis Association in the world as of 4th April 2022. Swiatek became the champion at the 2020 French Open and is the first Polish Grand Slam singles champion in history. 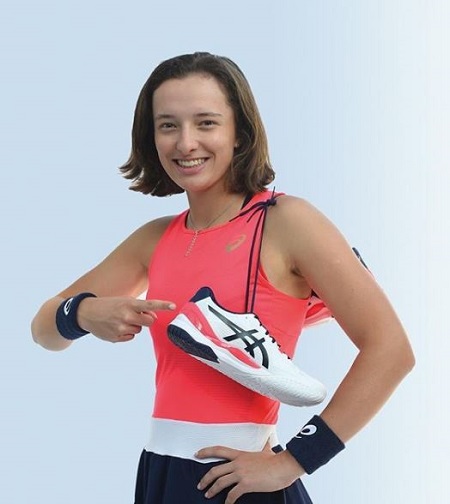 Until the start of 2020, Iga was a Nike athlete. After that, she is endorsed by Asics. As of 2022, her net worth is approximately $5 million.

Iga is a social butterfly who loves uploading her pictures on her Instagram. So far, there is no report or pictures regarding Iga being in a romantic relationship or having a boyfriend. She is far from rumors and controversies. For now, the tennis player is single and is fully focused on her career.

Besides, the tennis player is a cat lover and has a black cat named Grappa. In her spare time, she enjoys reading novels and listening to music. Prior to her games, Iga listens to rock music, especially the work of bands such as Pink Floyd, Pearl Jam, Red Hot Chili Peppers, and AC/DC. What's more, she also enjoys alternative music, jazz, soul and pop.

Iga was born to Dorota, an orthodontist, and Tomasz Swiatek, a former rower who competed in the men's quadruple sculls event at the 1988 Seoul Olympics. Further in her family, she has a sister Agata who briefly competed on the ITF Junior Circuit in 2013 at about 15 years old, but stopped playing due to injury troubles. Currently, she is a student of dentistry at the Medical University of Lublin.

Iga followed her sister into tennis. She trained at Mera Warsaw as a 14-year-old before later moving to Legia Warsaw.

In 2018, Iga won the 2018 French Open girls' doubles champion as well as the Wimbledon girls' singles champion as a junior. Also, she led her native nation to the Junior Fed Cup crown in 2016 and won a doubles gold medal at the 2018 Summer Youth Olympics alongside her teammate Slovenian Kaja Juvan.

The following year, Iga started playing regularly on the WTA Tour, the same year she made her tour debut. At her eighteen, she entered the top 50. Following her first appearance in a WTA final and a fourth-round appearance at the French Open, she lost to Simona Halep.

During her dominant French Open title run in 2020, she rebounded to win over Halep in the same round and did not drop a set or lose more than five games in any match during the singles event.