Omaha, Nebraska native, Hunter Sallis was born on 26 March 2003, under the star sign Aries. The eighteen years old holds an American nationality and is of Afro-American ethnic background. He stands 6 ft 5 in (1.96 m) tall and weighs 175 lb (79 kg).

Hunter Sallis enrolled at  Millard North High School where he did not start on his middle school basketball team but earned a spot on the varsity team as a freshman. Due to his lack of coordination at the time, he was nicknamed "Bambi".

During his senior year, he averaged 22.2 points, 4.6 rebounds, and 3.8 assists per game. Also, he led Millard North to its first Class A state title in 2021. He concluded with 1,819 career points, becoming the third-most in Class A history, behind only Andre Woolridge and Erick Strickland.

Rated a five-star recruit by ESPN and 247Sports, and a four-star recruit by Rivals, Sallis was the first five-star basketball recruit in Nebraska history. On 26th March 2021, he signed to r Gonzaga over offers from North Carolina and Creighton to play college basketball.

Comes From A Family Of Accomplished Players

Hunter Sallis is the son of Trevis Sallis and Jessica Jackson. His mother, Jessica is a former basketball player. As a sophomore and junior, she led the Central Eagles in back-to-back Class-A state titles, with a combined 50-0 record. Upon graduation in 1985, Jessica starred three years at San Diego State and briefly sampled professional ball.

As a single mom, Jessica introduced basketball to her three children as a family legacy.  She and Hunter share a passion with many layers that only strengthens their bond. 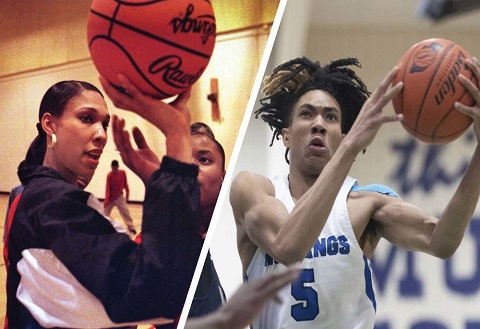 Hunter's eldest brother is a hairstylist to the stars and sister Jerrica was on a state title team and love the basketball game.

There is no report of Sallis' girlfriend/relationship in the media. Seems like the point guard is very secretive about his personal life. Since there is no confirmation, he is possibly single.

Does Hunter Sallis' Gets Paid Playing For College Team?

The NCAA has introduced a new rule recently which will allow its athletes to profit off their own personas, something they hadn’t been able to do in the past. The income source would be endorsements, compensation, and sponsored content on social media.

However, Sallis is yet to catch the eye of big brands for endorsement and sponsorships. As of 2021, his net worth is under review.